Unfortunately, this game went pretty much exactly how I thought it was going to go. Justin Verlander (9-3) threw a complete game four-hitter for the Tigers while Aaron Cook (0-2) got roughed up in six innings of work. Cook allowed 8 hits and 4 runs, then Rex Brothers and Clayton Mortensen both allowed multiple runs in relief (Brothers doing so without getting any outs).

Ty Wigginton provided the offense with a solo shot (his 7th) in the 5th, while Troy Tulowitzki had two of the other three hits for Colorado. Other than that, not very much went right for the Rockies. It's probably best not to dwell on it. Instead, call your dad and tell him how much you appreciate his contribution to your life.

At least the Rockies won the series and sniffed the .500 mark. They play three games in Cleveland next, as we get to see Jason Giambi in full-on DH mode. 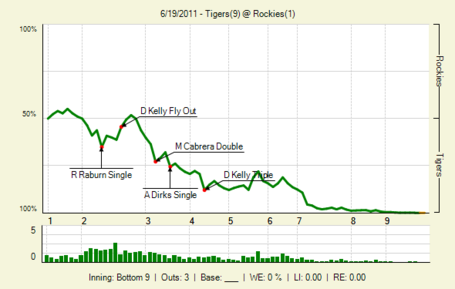 We Are Disappointed In: everybody else

Panda Rating: Not a pleased Panda, but not an angry panda either