Share All sharing options for: Fan Confidence and Ubaldo Jimenez

The Colorado Rockies were as lackluster in May as a team could be. We can measure fan confidence fairly easily with that handy fan confidence poll on the upper left, and with that, we know the fans' confidence is at its lowest point all season. Gauging the confidence of a team is a little bit trickier. Regardless of what cliches we might be fed, we can be certain an honest poll would yield many low numbers in the clubhouse at the end of May.

One large reason for that, arguably, would be Ubaldo Jimenez. Having a horse and an ace to play behind can physically and emotionally prevent the type of freefall the Rockies experienced last month. To wit - Jimenez won his first game since September 17 last night, just the second Rockies win in his 13 starts since that date. In comparison, Jimenez had already won SEVEN games at this point last season following a team loss. It is hard to freefall when you have a reliable stopper.

At various times this season, Jimenez was missing velocity, consistency, movement, control, command, or confidence. Usually a combination of many at once. For the first time all year, the vintage Ubaldo Jimenez showed up last night, throwing one of his top five starts in his career.

Ubaldo struck out seven, walked nobody and got 12 groundouts on his way to a dominating complete game shut out. He had all of his pitches working, as evidenced by his strikeouts:

Four different pitch types, and four of those K's came on just three pitches .That sort of dominance is no fluke. Ubaldo was Ubaldo last night. He posted his second complete game in his past three starts and allowed just four hits. He has 1.93 ERA away from Coors Field with a miniscule .093 batting average allowed 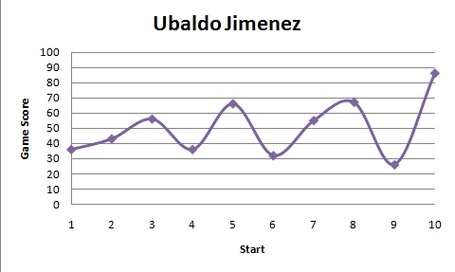 on the road, which rank 6th and 1st in MLB respectively. With Jorge de la Rosa out for the year, this is the type of performance the Rockies, and their fans, sorely needed from The Chief. Without him, the playoffs are almost a silly suggestion.

So is the angst over? Is Ubaldo officially back, or will you still get nervous when 38 takes the hill? On one hand, there is no smoke and mirrors to his start last night. To dominate as he did is equivalent to possessing the skill to do so, something he clearly did not have early this season.

Yet by comparing game scores, we can see his peak performances continue to get better, while his poor performances have actually gotten worse. Each previous breakthrough has been followed by a further horrendous setback at Coors Field. For those physics nerds out there, his game score graph is a perfect match for undamped oscillation with resonance. Inconsistency abounds. How confident are you, then, that Ubaldo Jimenez has turned the corner for good?