Rockies 8, Indians 7: Rox Come Back, Then Hold On, for Victory in Road Trip Opener

Share All sharing options for: Rockies 8, Indians 7: Rox Come Back, Then Hold On, for Victory in Road Trip Opener

On the strength of a big six-run fifth inning, the Rockies delivered rare road tacos to their fans as they held on for a one-run victory over the Indians.

The Rockies took a 1-0 lead in the first inning on an RBI single by Troy Tulowitzki. However, Cleveland countered with three in the bottom of the inning off of Juan Nicasio on a home run by Travis Hafner. They would tack on one more on a solo blast by Carlos Santana - again, coming against Nicasio, who was certainly not at his best tonight.

Trailing 4-1 heading into the fifth, the Rockies found themselves with two quick outs on the board after consecutive groundouts by Ty Wigginton and Charlie Blackmon. Then, the floodgates opened, beginning with a Chris Iannetta walk and ending with a Wigginton strikeout. Here's what happened in between:

The Rockies led 7-4 after their half of the inning was complete. The Tribe didn't waste any time getting back in it, as they plated two more runs of their own in the bottom half of the inning, both coming on a bloop single by Shin-Soo Choo off of Rex Brothers. Nicasio exited before the hit, but the runs were charged to him. His final line wasn't  pretty, as he lasted just 4.2 innings and six runs on seven hits and two walks - though he did strike out six.

Matt Lindstrom, who was awarded with the win, pitched a scoreless sixth inning. Rafael Betancourt allowed an inherited runner to score in his two-thirds of an inning of work, as Matt Reynolds gave up a base hit to Santana after pitching a very effective inning and a third. However, that came after the Rockies tacked on an insurance run on an errant pick off attempt by Cleveland catcher Lou Marson that allowed Charlie Blackmon, who had reached base via his second walk of the season, to score from second base. The Rox lucked out, as Chris Iannetta would have been out had the throw been half-decent.

Huston Street came on to pitch a 1-2-3 inning in the ninth for his 21st save of the season, despite allowing a couple of hard-hit balls.

The Rox are back at .500 overall, as well as on the road. Click through to see the usual stuff. 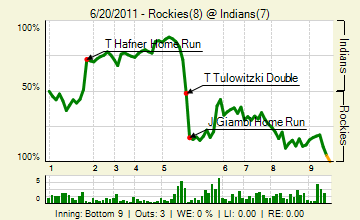