Coors Field Insider: For When Your Younger Kids Get Bored

Share All sharing options for: Coors Field Insider: For When Your Younger Kids Get Bored

It's the top of the 4th, tied at 2. The crowd is milling. All the runs were scored within the top 2 innings. There's a runner on first with 1 out and the pitcher is at the plate. Cook comes set, working from the stretch. Hudson squares. He delivers, and Hud-

Hangon buddy, the inning will be over so-

(in stereo) DAAAAAAAAAAD WE HAVE TO GO TO THE BATHROOM

Funny story, that's actually a scene taken from the bullpen. Rex Brothers and Clay Mortensen would not leave Rafael Betancourt alone. But I'm sure you could picture your kids saying this, or perhaps your nephews/nieces, or the kids behind you, or possibly Dexter Fowler.

But in all seriousness, we know the attention span children have. More importantly, the Rockies know. That's why there's a bunch of stuff to keep kids busy at the park. The obvious option is to take kids for a walk, but that's not nearly as fun as we'd like to think, especially for those of us who actually HAVE kids and know the stark reality of how kids like to run around and have fun.

Coors Field, back behind the LF corner, has a playground. A pretty sweet playground at that. There's a slide, a couple of steering wheels, one of those spinny tic-tac-toe things, and that weird soft rubber flooring stuff that makes it so you don't absolutely shred your knees if you take a spill. There's also an attendant there to make sure that the kids playing in said playground aren't 9 year old bullies pushing kids down the slides and other bully activities.

So your bundle of joy runs around the playground for an inning or so, and if you have a group of parents, you can likely take shifts: one person makes sure the kids are all accounted for, the others stand by the rail watching the game and looking back over their shoulders every 3rd pitch. Oh who am I kidding, everyone draws straws and if one parent doesn't step up to take the bullet for the rest of the game, someone gets to go take the kids to the playground and miss all of the delightful RISP-stranding goodness.

Now the kids have run around for about 20 minutes and now they want to do something else. Maybe they want a snack. Well you obviously can't give kids a full on serving of the Helton Burger or the Monster Nachos, those things are pretty much the size of the kid themselves.

YOU'RE IN LUCK - as seems to be the theme of this series, I create the problem then show you how Coors Field solves it? I feel like I'm in the standard issue "As seen on TV" commercial, where the life is terrible until the product is introduced, and suddenly the kids are all behaving and the husband isn't on the couch anymore and everything is clean and peaceful? Yep, read Coors Field Insider, and your problems will soon be scarce!

Buckaroos is your stop for not only feeding your kids with kid sized snacks, but also your stop for kid-sized souvenirs. The Diamond Dry Goods store has some kids stuff, but Buckaroos is Just For Kids. Kid sized nachos, ice cream, and other neat stuff - and appropriately priced for the kids as well.

I was able to snap some shots of the playground and the Buckaroo's shops while at Coors with a friend. A friend with a child. Because come on, I'd feel more than a little weird taking pictures of all the kids' stuff without a good reason or a friend with a kid as an alibi. 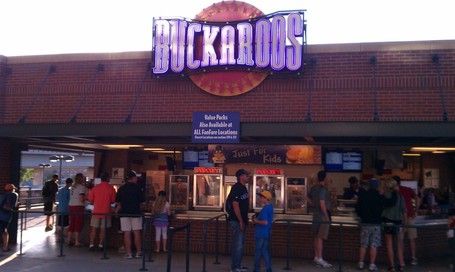 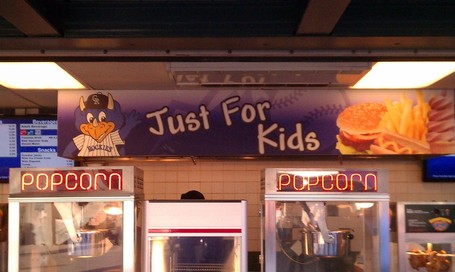 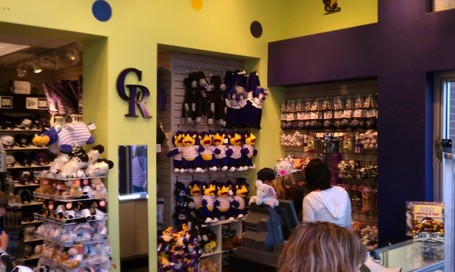 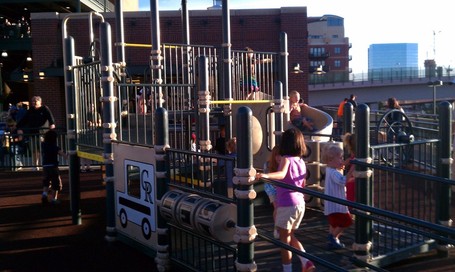