If I were to describe Jhoulys Chacin's 2011 season, it would be as follows:  gets a ton of ground balls, gets a good number of strikeouts, is as unhittable as anyone, but tends to have inconsistent stretches with his fastball command.  Each of those aspects existed again tonight, but on steroids.

The Rockies' hurler took a no-hitter into the sixth inning, broken up by Shin-Soo Choo with a ground ball RBI single up the middle on Chacin's 102nd pitch of the game.  Yes...his 102nd pitch....in the sixth inning.  The Venezuelan's fastball command evaporated at times (he walked three straight batters in the third and two straight in the sixth), and he walked six on the night along with seven strike outs.

His ability to work around the walks is in part a testament to his continued ability to keep the ball out of the air.  The Indians hit the ball into the air just twice all night against the Rockies' starter, with ten outs coming on the ground.

Jason Giambi doubled twice and singled, but it was Seth Smith who carried the offense.  Smith homered in the sixth inning to give Colorado a brief 3-0 lead.  After two runs scored in the eighth inning, both charged to former Indian Rafael Betancourt, Smith led off the ninth against closer Chris Perez with another home run to provide the winning margin.

The bullpen continues to be shaky, but they pieced it together well enough.  Betancourt allowed all three men he faced to reach and has allowed runs in 4 of his last 6 appearances (though this was the first time on the road since May 20).  Huston Street got two quick outs before allowing the winning run to reach second base.  He struck out Austin Kearns to lock up his second save of the series.

Street's shaky save was helped by manager Manny Acta removing Travis Hafner for a pinch runner in the eighth inning, despite that runner not even representing the tying run.

With the win, Colorado clinched the series win, pushed their interleague record to 4-1, and have the chance to sweep an interleague series tomorrow against a first-place team that was 6-0 in interleague two days ago.  Most importantly (take your pick): 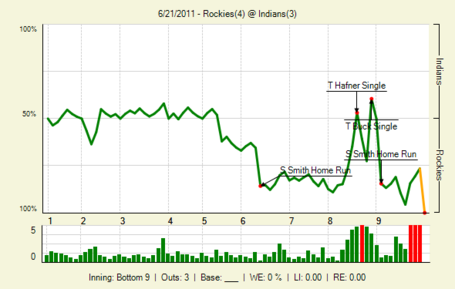