Balk and a Blast: Hammel, Rockies, lose to Indians

Share All sharing options for: Balk and a Blast: Hammel, Rockies, lose to Indians

After winning two one run games in Cleveland to start the series, the Rockies wound up losing the opportunity to sweep the series on a pair of technicalities. The first technicality was this rule that states a pitcher has to complete a pitch once his delivery has been set in motion. When Jason Hammel failed to do this with runners on second and third in the third inning, the pair of Indians were awarded a base, scoring the second run of the game for Cleveland. The second technicality was a bit more obscure, apparently there's this rule that when you leave a fat pitch over the plate, and a player like Travis Hafner connects with that fat pitch and drills a hole through the right field stands, weakening the stadium structure and creating a need for a building inspection before play is allowed to resume, the play results in a player being awarded all the bases, as well as any player already on base when said player destroys the stadium in said fashion. Thus through this rarely used loophole, the Indians were able to craft a 4-3 victory over the Rockies on Wednesday.

In other news, Ty Wigginton did a Seth Smith impression by hitting two HR's, he hoped to get a Thursday Rockpile devoted to how awesome of a player he is. Well sorry, Ty, Rockpiles are for closers, your two blasts were spiffy, but Seth's won the game. Better luck next time.

Also, Jason Hammel wasn't actually that bad tonight, outside the brain lapse on the balk and the fat pitch to a hot hitter in Hafner, not that he was particularly impressive, either, but he kept the Rockies in the game at least. The offense? Not that great outside of Wigginton, but also a bit unlucky. With a pitcher like Josh Tomlin, it's imperative that the ball get put in play to at least have a chance that something will fall, and for the most part, the Rockies did this, that was the unlucky part, but they failed to adjust to Cleveland's bullpen when Tomlin was removed, striking out for six of the last eight outs. That part of the game responsibility probably falls more on their shoulders

The incomplete FanGraphs image, and the Roll call are after the jump. 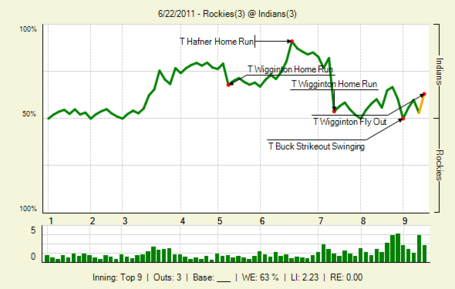 The limitations of WPA is apparent in tonight's trailer, Jason Giambi had a -0.121 WPA despite making the second best contact of any Rockies hitter to Wigginton (+.285) tonight.