Lack of confidence in the Cook: Tracy makes troubling choices as Rockies lose to Sabathia and Yankees.

Share All sharing options for: Lack of confidence in the Cook: Tracy makes troubling choices as Rockies lose to Sabathia and Yankees.

Okay, pop quiz time, clear your desks except for a blank sheet of paper and a #2 pencil:

Which lineup decision hurt the team's chances of winning Saturday the most?

When did Jim Tracy decide that Saturday was a throwaway game?

Circle the pair of teammates with a higher wOBA against LHP's (50 PA minimum) this season than Iannetta and Wigginton:

So this game becomes an interesting one to look at in the course of a long season in that it seems a decision was made early that the chances to win were slim with Cook against the Yankees lineup and Sabathia against the Rockies lineup . The single biggest indicator of this would be the decision to go ahead and rest Iannetta today, following a night game on Friday, rather than pushing him to play and resting him on Sunday. Iannetta has the MLB season's third highest wOBA against LHP's in 2011, trailing only Shane Victorino and Michael Cuddyer. Keep in mind too that Iannetta already was benched Wednesday night against Josh Tomlin and had the day off Thursday. Simply put, he's a MVP level player at the plate against southpaws this year and not playing him against them is the single most damaging decision Jim Tracy could make to a lineup.

The question is why, does resting Iannetta give us an extra edge in tomorrow's rubber match against the RHP Nova? In a way, it does, Nova's a wild pitcher, prone to walking batters, which plays into one of Iannetta's strengths. The bigger issue to me though, is that I wonder if CDI couldn't have handled both games with the two days of rest on Wednesday and Thursday.

The next big issue for me with regard to this game would be the lack of confidence this decision shows in Cook, which I think mirrors most Rockies fans' feelings on the pitcher at this point in the season. When Dan O'Dowd speaks of needing additional pitching, a sign like the lineup today tells me that it's likely Cook's spot that's in trouble should a move get made. As a fan, I think I'd be fine with that, as today Cook did little to rise above the low expectations everybody seemed to set for him, allowing a career high 12 hits and six runs to a tough New York lineup.

The Rockies did eventually break through against Sabathia and his reliever, Buddy Carlyle, scoring three, including two from a Wigginton home run. Wigginton has now hit three HR's on this road trip.

By the way, since they're mostly judgement calls, I'm going to let you formulate your own answers to most of the quiz questions above, but the answer to the last one would be Bautista and Arencibia. No other pair of teammates had a higher combined wOBA going into today than Iannetta and Wigginton against LHP's in 2011. Contrary to what I thought before starting this post, we really do have enough weapons to beat top flight left handers (not Seth Smith, but they're still there) it's just a matter of using them correctly. 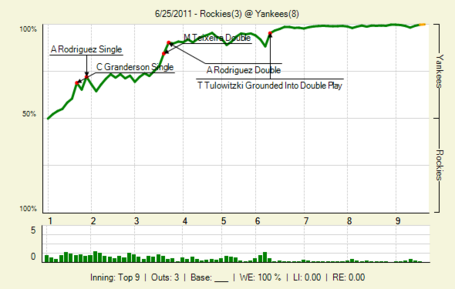