Everything was right with the world if you were a Rockies fan heading into the bottom of the fifth inning. The Rockies had pushed across three runs on Ivan Nova and the Yankees, two on solo HRs by Ty Wigginton (11) and Chris Iannetta (10). Juan Nicasio was pitching out of his mind, retiring everyone he faced for the first 4.1 innings. Then he came back to earth, first allowing a single and back-to-back homeruns to tie up the game, and the Rockies fell down with him.

After Wigginton homered again (his 12th overall and 7th in June) in the top of the sixth, Nicasio allowed the first two men he faced in the sixth to reach base and then was pulled after only 84 pitches for Matt Belisle, who allowed the tying run to score on Nicasio's behalf. Then in the seventh, Belisle (5-3) allowed the go-ahead run with an assist to Troy Tulowitzki, who booted a double play ball that would have ended the inning. A homer off of Matt Reynolds to lead off the eighth made it a two-run deficit, and that was all she wrote -- as the Rockies went meekly, oh so meekly into the night with five strikeouts in their last six at-bats.

With the loss, Colorado dropped the series to New York and saw their series-winning streak snapped at four while moving back under .500 on the season. They'll play a make-up game tomorrow afternoon against the Cubs, followed by more interleague play, this time at home against the White Sox.


Graph: And what an ugly thing it is 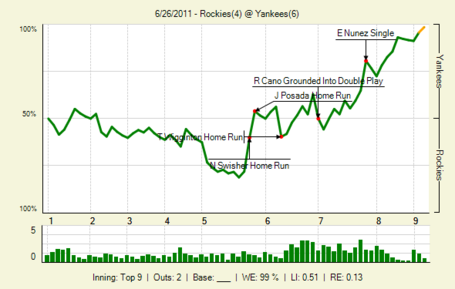