Aramis Ramirez and Carlos Pena each homered twice, and Matt Garza pitched 7.1 innings of five-hit ball as the Cubs beat the Rockies 7-3 in the make-up game of a questionably-postponed series finale from May.

Garza had suffered two tough losses to the Rockies prior to this game, as he was mostly done in by costly defensive mistakes. However, the Chicago bats made sure that didn't happen today, as they took advantage of a very erratic Jhoulys Chacin to the tune of six runs on nine hits and three walks (plus three homers) in five innings. Pena belted both of his homers off of Chacin, while Ramirez victimized Chacin for a two-run bomb in the first and hit another long ball off of Clayton Mortensen in the sixth.

Carlos Gonzalez joined the multi-homer game party, as he led off the contest with an opposite field home run off of Garza, then took him deep again in the eighth. He now has 12 homers on the year. Troy Tulowitzki had a pair of singles, Todd Helton had an RBI knock, and Jonathan Herrera singled as well, but that was the extent of the Rockies offense on this day. The 5 through 9 spots in the order combined to go 0-for-18 with a walk and seven strikeouts.

The Rockies started the week just two and a half games out of first, and they now find themselves six back. A good showing during the upcoming homestand is of the utmost importance.

Graph, Rowcall, and tomorrow's starters after the jump. 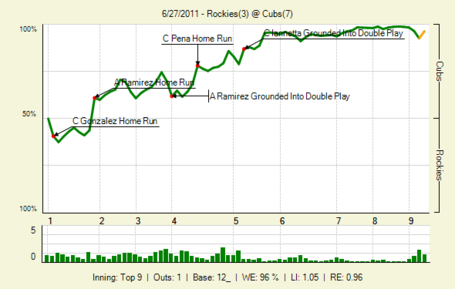