It took nearly half of the 2011 season, but the Colorado Rockies are finally owners of a walk-off win.  Tied 2-2 in the bottom of the 13th inning, Troy Tulowitzki worked a 1-out walk.  Then Seth Smith struck out on three pitches against lefty Will Ohman.  With the outfield back to prevent an extra base hit, Ty Wigginton hit a high blooper to straightaway centerfield.  With Tulowitzki in motion, 3B coach Rich Dauer sent Tulowitzki, and the Rockies scored a walkoff run from first on a bloop single.

Seth Smith continues to punish right-handed pitching, as he drove in both runs in regulation - one on a sacrifice fly and one on a single, but the biggest heroes of the night were the Rockies pitchers, particularly the bullpen.  Matt Belisle, Huston Street, Matt Reynolds, Rafael Betancourt, Matt Lindstrom Rex Brothers each threw a scoreless inning, each protecting a 2-2 tie.  Combined, they retired 24 of the 28 batters they faced.

In what was a night for landmarks, Brothers was awarded with the first win of his career thanks to his 1-2-3 nine pitch 13th inning.  The White Sox lost for the first time in four tries in Denver as well.

Jason Hammel wasn't bad either, retiring his last seven batters and being quietly efffective on the night, despite the fact his putaway pitch has seemingly disappeared.  The lanky right-hander managed to record 21 outs Tuesday night without punching out a single White Sox batter, giving him just 7 K's in his last four starts.  That tends to cause problems, but Hammel managed to induce 12 groundballs to put up a rather strong start.

Alexei Ramirez hit a solo home run in the second inning, and the White Sox scored a run in the fifth inning by virtue of a single by the 8-hole hitter, four pitch walk to the pitcher and a double by Juan Pierre, who is more of a punchline than threat of late.  After a walk, Hammel induced a double play from Carlos Quentin. 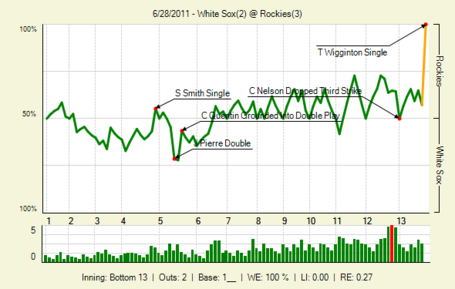