A night later and the story's the same, but the names have been changed. This time it was the Rockies turn to fail when opportunity presented itself, over and over, and sure enough, the baseball gods got them, so did the White Sox as the Rockies lost to Chicago, 3-2. But did it have to go that way? Was there any chance that those cursed rallykills could have been avoided? Well, maybe. Let's take a look:

A two out rally starts in the bottom of the first when Jason Giambi singled and Troy Tulowitzki walked, leaving runners at first and second for Ty Wigginton. Wigginton popped out, ending the threat.

The easiest fix? Probably just dropping Jonathan Herrera, him of the .266 Coors Field OBP in 2011, from second in the batting order to seventh. This makes it more likely that an additional runner would have been on for Giambi and Tulo.

With one out in the third inning, Carlos Gonzalez tripled. Unfortunately, the weak hitting Herrera immediately grounded out to short, which meant Jason Giambi would have to get a base hit to knock Cargo in. Giambi did not, flying out to right. I'm just going to say this, but that fly would have scored Cargo with one out.

Uhm, try this potential solution out: if you drop Jonathan Herrera from second in the batting order to much later, you can avoid these embarrassing situations.

Carlos Gonzalez singled to lead off the sixth, but Herrera grounded into a double play. Giambi then homered, but the chance to put crooked numbers up was killed by the DP.

This one's tricky, but a mom in Cleveland discovered a secret that for less than $10 just about any MLB manager could follow to find success in these situations. Simply drop Jonathan Herrera from batting second to batting seventh, eighth, or get this, even ninth, if you have to play him at all. Crazy, I know, but it works. Something about not having crappy hitters generating outs in important situations.

In a tie game, Carlos Gonzalez again leads off with a single. Herrera and Tracy, not going to let the mistake of the sixth inning repeat itself, decide to bunt him over to second. The sacrifice works. Gonzalez is now in scoring position with one out. Giambi and Tulowitzki walk. Wigginton grounds into a double play. Rally killed.

Dear Jim Tracy, if your second hitter has to do things you normally ask the pitchers who bat ninth to do, he probably shouldn't be batting second. Drop Herrera, drop Nelson, do not bat them second in the lineup while they can't hit. You are angering the baseball gods by doing this, and they are making the Rockies suffer. Four solid opportunities to score tonight that went to the wayside, four outs created by Herrera. I understand that for the time being Tracy's hands are a bit tied with who he plays at second base, but that doesn't mean he has to bat them where they're going to run the most likely Rockies scoring opportunities aground.

Ubaldo pitched well. Ty Wigginton also homered. Huston Street gave up the losing run, but it could have possibly been salvaged on the play depicted in the photo had Chris Iannetta (on the catch) and Seth Smith (on the throw) executed better. This loss doesn't really fall on their shoulders as much as it does on the poor lineup construction. 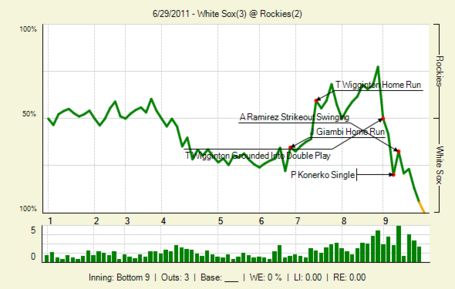