Share All sharing options for: Friday Rockpile: Trying to Find Rhyme Or Reason From Ubaldo's Shutout

After Andrew Fisher's interesting look at the up-and-down nature of Ubaldo Jimenez' starts this season, I decided to go and do an exploration of my own. My thought was "you know, I tend to have a short term memory about things when a player is drastically underperforming. Maybe Ubaldo always has starts to seasons this rough!" What Andrew Fisher did is to graph Ubaldo's Game Scores for the season. The Game Score is a metric devised by Bill James to try and track the overall quality of a start based on hits and walks and innings pitched and stuff like that.

Anyhow, I looked into it, i graphed all of Ubaldo's starts by number of start in the season per year, and look at the amazing graph I made: 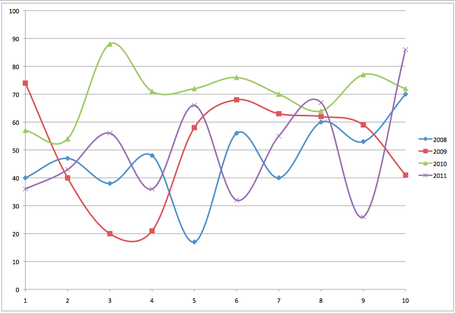 Do you see it? Do you? It's right there! It's completely obv - ok I don't see anything either. Well, almost nothing. It looks like 2008 and 2011 are doing this weird little dance around each other, matching a high for a low. Given how completely decent Ubaldo's 2008 was, I don't know if I want that "inverse" dance to continue, either.

What is interesting, however, is that Ubaldo's 4-hit shutout of the Dodgers on Wednesday was the 2nd best start of his entire career, second only to his no-hitter against Atlanta in 2010. Actually, it's tied for 3rd with his Memorial Day Massacre of the Giants,  Look at this next graph and be amazed by the proof: 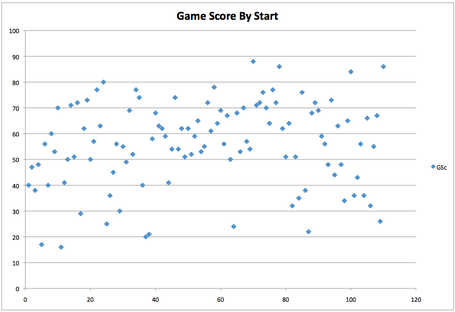 Look at that proof. Everyone loves graphs and dots and stuff.

After his start, Ubaldo claimed he "Got his Velocity Back Tonight". That's right, Dodger Stadium is bringing sexy back. And its name is Ubaldo Jimenez. Troy Renck in the above link claims that Ubaldo's last pitch of the night was at 98. Well, other guns tracked it at 96, but you know, if Ubaldo feels like he has his heat back, HE DOES. NOBODY TELL HIM OTHERWISE. As Yogi Berra said, "Baseball is 90% Mental. The other half is Physical."

Well, I don't want to know what Jimenez is doing behind closed clubhouse doors, or care, but whatever's working is working.

This was the kind of start the team NEEDED. Not just in terms of "some pitcher went up and tossed a 4-hitter", but more "The Ace of the Rockies, Ubaldo Jimenez, went up there and tossed a 4-hit shutout." I personally feel like Ubaldo's struggles this seasons have been a wet stifling blanket on the team. Not to fault him, per se, but it's like everyone needed that figurehead to look up to and be proud of. Maybe it's just the feeling that "nothing is going right, but now that Ubaldo is back on track, there's hope!"

So is Ubaldo back on track? Jack Moore and I agree that it's hard to say, but it's most certainly a step in the right direction.  As has been pointed out by everyone, over his past 4 starts, Ubaldo has gone 30 innings (7.5 per start) with a 3.30 ERA, striking out 22 to only 8 walks, and 0 homers in that time as well. Is he back for realsies? I have no idea, but the confidence has to be at a season-high right now.