I kind of wonder how long the season goes on before excuses become too many. Tonight is the worst matchup of the series for the Rockies, facing known Rockies mower-downer Matt Cain. Jhoulys Chacin should be able to outlast Madison Bumgarner, and Jason Hammel is a better pitcher than Ryan Vogelsong. But the Matt Cain game, they'll probably lose that one.

Losing to Matt Cain is one thing. They managed 10 baserunners over the course of the night, and scored 1 run.

It's not as if the Giants were worldbeaters either, putting the same 10 tally on base. They just happened to get 5 of them in the 4th.

But seriously, how many more series have at least that one automatic loss programmed into the schedule? "Well, we lose against Matt Cain, and we MIGHT beat Bumgarner and Vogelsong".

Every team has its nemeses, and Matt Cain is one for the Rockies. The Cardinals have Bud Norris. The National League had Greg Maddux.

But this nemesis business seems to be the automatic excuse for leaving 9 runners on the basepaths. For failing to score, for striking out with a runner on 3B.

Juan Nicasio gave the Rockies plenty of chances to win. Turning in a quality start is downright acceptable, but going 1-for-13 with RISP isn't.

The whole Roster Shakeup thing may not be over. Fowler turned in another hat trick and was pinch hit for in the 9th against Brian Wilson.

There's still 2 games left, and decent matchups. The Rockies just need to take advantage of them. 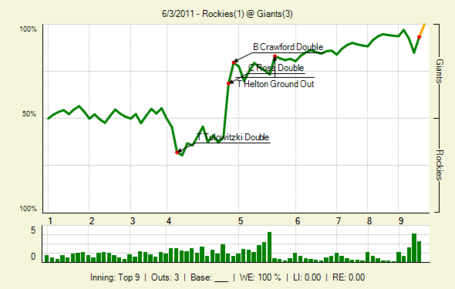 People we are disappointed in:

Just about everyone who didn't pitch

People we aren't disappointed in:

People we're not disappointed in but aren't terribly thrilled with, either:

Mondo and SDCat09 both hit double centurion. Nobody else hit single.