Former Rockie nightmare Jake Peavy returned to Coors Field representing the White Sox, and though the team managed four runs off of this former nemesis, they proceeded to lose the rubber game of the series despite an encouraging outing from starter Aaron Cook.

The man of the day was Todd Helton, who played his 2000th career game today, all of which have come with the Rockies. He was 2 for 5 on the day with two strikeouts a run scored.

The Rockies offense did most of its damage in the first inning. After singles from second baseman Jonathan Herrera and first baseman Todd Helton (both of whom had two hits in the game), Troy Tulowitzki knocked them in with a home run, setting a positive tone early.

Despite four walks allowed, Cook produced eight ground ball outs over his six innings pitched, including two double plays. The only White Sox run he allowed came in the second inning when center fielder Alex Rios, who had previously walked and advanced on a hit by pitch and a fly-out, scored on a wild pitch. Cook did not allow an extra base hit in the five he did allow to Chicago. Regardless, Cook would not be given his first win of the season after the White Sox tied the game later on.

The Rockies added another run in the sixth when catcher Matt Pagnozzi, having struck out the previous two at bats against Peavy, batted in his doppelganger, right fielder Seth Smith, who had doubled earlier in the inning. The White Sox had intentionally walked left fielder Charlie Blackmon ahead of Pagnozzi.

Rafael Betancourt was selected to pitch the top of seventh inning today, where he allowed a solo home run to second baseman Gordon Beckham. After recording a pop-out, Betancourt was replaced by lefty Rex Brothers. After recording the second out and allowing a single and a walk, Jim Tracy called for the third pitcher of the inning, Matt Belisle, who got Rios to ground out on one pitch. The Rockies threatened offensively in the bottom of the inning against reliever Will Ohman, but were unable to score with a bases loaded opportunity.

Disaster struck in the eighth as the bullpen devouring continued with Matt Lindstrom coming in to throw. After getting first baseman (at the time) Mark Teahen to ground out, Lindstrom allowed three straight hits, with shortstop Alexei Ramirez coming around to score, followed by pinch hitter A.J. Pierzynski on a sacrifice fly from left fielder Juan Pierre. The Rockies once again threatened in the bottom of the inning against former Colorado draft pick Chris Sale, but were unable to bring Blackmon around score after a leadoff infield single.

For the third straight time, closer Huston Street was called in to pitch the ninth inning of a tied game. It didn't work out so well last night, but Street retired the first two batters with ease. Teahen frightened the crowded with a deep fly ball to left field that was caught by Blackmon at the wall for the third out.

Nearly out of bullpen pitchers, Tracy called on long reliever Clay Mortensen to throw the tenth. With the bases loaded and one out Mortensen allowed a Pierre single, scoring what would be the two winning runs for Chicago. One batter too late, a double play ended the inning. White Sox closer Sergio Santos finished the game with a one-two-three inning.

The Rockies also welcome new teammate Mark Ellis to the organization, after having traded Bruce Billings and a PTBNL/cash before the game. Ellis is expected to be ready to play tomorrow, meaning a roster move will be made after the game.

Also we agreed to terms with supplemental round draft pick Trevor Story. Yeah, that happened.

The Rockies are now half way through the season. They play the Royals at Coors Field, 6:10 PM Mountain Time tomorrow.

The usual after the jump. 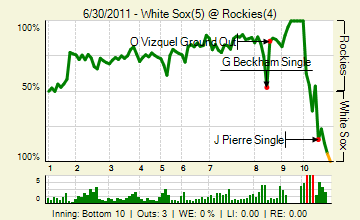