Yet again, one run wasn't enough to win the game for the Rockies. What is wrong with our pitching? I mean, they should be able to hold the other team scoreless for nine innings, right? Seriously though, I am not pleased that yet another fine pitching outing went for naught today. Unfortunately, Chris Iannetta's 8th homerun in the fifth was the only offense Colorado could muster (they had 4 hits on the day, and so did the Giants).

Jason Hammel no-hit the Giants for the first 5.2 innings, then gave up two singles in a row to give up the tying run. Hammel went seven strong innings, giving up only those two hits and striking out four, then was pinch-hit for in the eighth by Ryan Spilborghs (struck out). Given a tie ballgame in the 8th, the Rockies' best reliever so far in 2011, Matt Lindstrom (0-1), wasn't able to pitch a clean frame, giving up a run on a walk, a sacrifice, and a single.

Ryan Vogelsong (4-1) matched Hammel pitch for pitch, going eight innings and striking out seven. In all, Colorado struck out 9 times today--four by Carlos Gonzalez, three by Seth Smith (gee, that's not a whole lot of offense out of the top of the order) -- and only walking once. Not a good ratio, gentlemen.

With the loss (played in a brisk 2 hours and 13 minutes), the Rockies move to 27-31 on the year, at least 5.5 games back of the division lead. I believe the expression is: "You're killing me, Smalls". 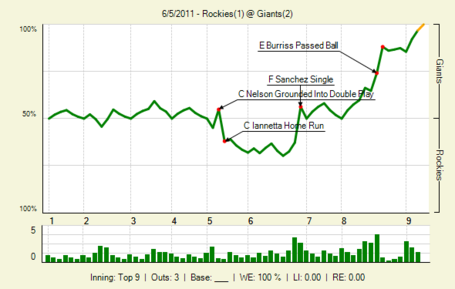 We Salute: Hammel (.220 WPA), Iannetta (.074) -- fun side note, Iannetta leads MLB catchers in fWAR even though he doesn't qualify for the batting title

Panda Rating: Tired of this No Offense Bullcrap Panda