Rockies 3, Padres 0: Key Ninth-Inning Hits Ensure Rox Victory. In Other News, the Moon is on Fire

Share All sharing options for: Rockies 3, Padres 0: Key Ninth-Inning Hits Ensure Rox Victory. In Other News, the Moon is on Fire

I've been constantly rewinding my DVR to make sure it actually happened, and the box score confirms it - the Rockies, behind big ninth-inning hits by Ty Wigginton, Seth Smith, and Chris Iannetta, defeated the Padres 3-0 in front of 26 fans at Petco Park in San Diego.

Wigginton led off the inning with a double, but Ryan Spilborghs brought the stomach pains with a groundout to shortstop that held Wigginton at second. However, Seth Smith came through big time with a triple to centerfield that eluded the stretched-out glove of the Padres' Chris Denorfia (which wasn't the only time Denorfia failed at diving, as you'll read about below), giving the Rockies a two-run cushion. Then, the absolute unthinkable happened - Chris Iannetta hit an RBI single, giving Colorado back-to-back run scoring hits for the first time since June 14th, 1977. Things got slightly less surreal after that, as Iannetta and Jason Giambi were victimized on a strike-'em-out/throw-'em-out double play ended the inning. However, mass confusion resumed shortly thereafter as Huston Street came on to pitch a 1-2-3 bottom of the ninth, including two quick strikeouts to start the inning.

The Rockies scored in the first inning - something they're not completely unfamiliar with - as Chris Nelson took advantage of Chris Denorfia's diving shenanigans and earned himself a triple in the process. Nelson would double later in the game, but would be thrown out trying to stretch it into another triple on simultaneous bad calls by Rockies third base coach Rich Dauer (for sending him) and third base umpire Bill Welke (for not seeing that the tag was not made in time). Anyway, after Todd Helton failed to get him home with one out, Troy Tulowitzki singled off the foot of Clayton Richard, giving the Rox a 1-0 lead that would stand until the aforementioned ninth-inning rally. A valid reason for that was Clayton Mortensen, who danced around a little bit of traffic (although admittedly becoming stronger in his later innings) to the tune of no runs on five hits and two walks in six innings, while striking out three. He lucked out on a few occasions earlier in the game, but to his credit, hung in there. On the other side of the coin, Richard certainly pitched well enough to win, but ultimately found himself Bum'd (or Hammel'd, as it's better known as around these parts) after giving up just one run five hits and three walks in seven frames, while notching eight K's.

Rex Brothers, Matt Belisle, Rafael Betancourt, and Matt Reynolds combined to bridge the gap from Mortensen to Street by tossing two scoreless innings. It was Brothers' debut appearance in the big leagues, and his 97 MPH fastball with good movement certainly didn't disappoint, despite giving up two hits (although only one of which was legit). 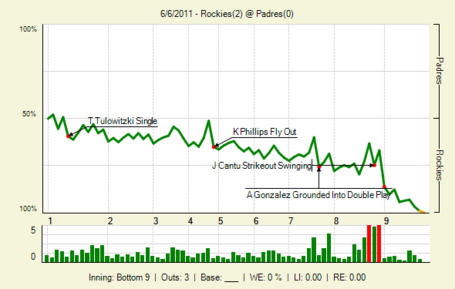 via www.fangraphs.com. The score lies.

Tomorrow, Ubaldo Jimenez will go for his second win of the season opposite Tim Stauffer. First pitch is at 8:05 PM MT. Let's hope the offense will be of a bit more assistance than they were the last time (or tonight, even).