Padres 2, Rockies 0: Ubaldo Back, But Bad Bats and Defense Betray

Share All sharing options for: Padres 2, Rockies 0: Ubaldo Back, But Bad Bats and Defense Betray

Ubaldo Jimenez is officially back.  For his second consecutive start, The Chief allowed no free passes, this time striking out a season high eight batters.  He dominated the Padres for seven innings throwing all of his pitches for strikes, punctuated with a strikeout of Brad Hawpe in the sixth inning on a ridiculous 99mph splitter at the knees.

Of all potential storylines in June, perhaps the most important was the potential resurgence of Ubaldo the Great.  While his two great starts have come against two of the weakest offenses in the league, on the road, his control and velocity remain favorable predictors of future success.

The offense once again ruined a great pitching performance by a Colorado hurler.  By getting shutout by Tim Stauffer and Heath Bell, the Rockies have scored 13 runs in their last 8 games, the lowest total in an eight game span in franchise history.  The have not scored more than three runs in any of their last nine games, and have stalled out below four runs in 15 of their last 17 games.

Charlie Blackmon made his MLB debut and showed decently enough, flying out to center twice and grounding out to first.  Seth Smith singled and doubles, and Carlos Gonzalez showed flashes of breaking out of his funk with an opposite field double and walk.

When the offense isn't scoring runs, fundamentals are at a premium, and that killed the Rockies in the fifth inning.  With two outs, Kyle Phillips pulled out a three wood and punched an 0-2 change-up out of the rough for a ground ball single.  After a wild pitch, Alberto Gonzalez hit a ground ball up the middle, which bounced off Chris Nelson's glove and leg and into center field.  Snafu 1.

Knowing how dominant Ubaldo was, the Padres sent Phillips home, which was a mistake.  Troy Tulowitzki picked up the ball behind second base and had Phillips out at home by twelve steps, but he rushed the throw home and bounced it in front of the plate.  Snafu 2.  Jose Morales could have calmly caught the bounce and tagged Phillips, but he bobbled the bounced throw, and the Padres drew first blood.  Snafu 3.  Jimenez then grooved a fastball to pitcher Tim Stauffer, who singled, giving San Diego that all important two run lead at PetCo Park.  Snafu 4.

That's the long story of the game.  The short story - Ubaldo was fantastic again, the defense fell apart on one play, and the offense was as terrible as always.  They can still win their first three game series since April 17 tomorrow, when Aaron Cook returns to the hill, opposed by Dustin Moseley. 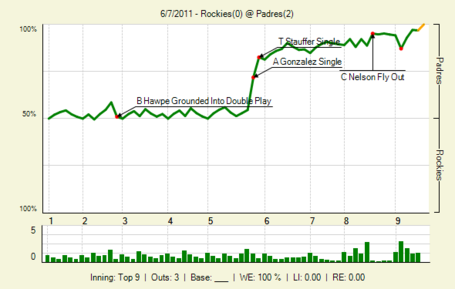