With the Rockies putting several newbies onto the production line over the past couple of weeks, they're likely looking for some company role models to step up and show them how the team manages to somehow win occasionally on the road, and on Wednesday afternoon they got those examples of good company behavior from the two likeliest of suspects.

Todd Helton (1st round, 1995 draft) hit a home run, two doubles and a single to lead the Rockies offense. Troy Tulowitzki (1st round, 2005 draft) wasn't far behind the Toddfather in production with three hits and three RBI, including the game winners on a ninth inning double off Padres closer Heath Bell. The pair of franchise faces combined to score four and drive in all five of the Rockies runs in the 5-3 victory over San Diego. Meanwhile, Aaron Cook (2nd round, 1997 draft) returned after missing the first two months of the season to injury and pitched effectively for five innings before running into some trouble in the sixth.

Carlos Gonzalez led off the top of the ninth with a single off Bell, was moved up to second with a bunt from Jonathan Herrera. Helton was intentionally walked to set up the double play, but both runners advanced on a wild pitch leading up to Tulowitzki's game winning double.

Helton tied Hall of Famer Rogers Hornsby on the all-time career doubles list with 540, and passed former teammate Larry Walker on the list for career extra base hits. While he was collecting the milestones of a long and productive MLB career, Charlie Blackmon (2nd round, 2008 draft) collected one of a very fresh MLB career, getting his first major league hit.

The Rockies won a series for the first time since the middle of May, when they swept the Giants in two games (they've gone 0-5-1 in the six series since,) and this was the first road series win for the team since completing a two game sweep at Chicago on April 26th. The Rockies now return home to face the Dodgers, hoping to have gained some much needed momentum with this win. 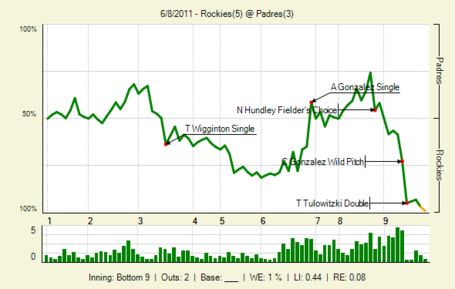