Several fans in attendance of today's Rockies/Dodgers game at Coors Field in Denver, Colorado have reported sightings of something alien.

The accounts of the event are spookily consistent; multiple accounts claim an unprecedented sighting of the number "9" in the "Rockies Runs" column on the field's electronic scoreboard. This unusual occurrence was accompanied by an unusually high rate of productive at bats from the Colorado Rockies during the late innings of the game.

Flabbergasted by this news, I have consulted three experts on this subject, looking for any level of insight.

I have analyzed video of the event myself, and while the grainy and unpolished footage remains inconclusive, I have written an account of what appeared to happen below.

Juan Nicasio's first start as a "permanent" member of the Rockies rotation saw an inefficient first and second inning encompassing nearly 45 pitches. In the fourth, he allowed a home run to the hot-hitting Matt Kemp. Things were broken open in the top of the fifth when three singles (including one from Dodgers starting pitcher Clayton Kershaw) and a triple from Matt Kemp extended their lead to four runs.

The offense reacted predictably against the skilled lefty Kershaw, producing only two hits until the sixth inning when the bats suddenly came to life. The Rockies scored three runs on four straight baserunners, with a double from Troy Tulowitzki bringing the final two around.

Los Angeles regained their four run lead in an ugly top of the seventh. A throwing error from catcher Jose Morales on a bunt from LA shortstop Dee Gordon opened the door for Kershaw (who had singled yet again) to score from first base. Reliever Matt Reynolds was unable to limit the damage in the inning, allowing doubles to both Casey Blake and Kemp later in the inning.

But the Rockies, thankfully, weren't finished. They continued to touch up Kershaw on his third time for the lineup, as Charlie Blackmon and Morales produced back to back singles. A walk to Eric Young Jr. was the final straw for Don Mattingly, who signaled the bullpen. Relievers Scott Elbert and Mike MacDougal allowed five runs between them, including one run walked in by each of them, giving the Rockies an 8-7 lead. It would take a fourth pitcher in Blake Hawksworth to get the Dodgers out of the inning. In the eighth, the Rockies continued the offensive explosion against Josh Lindblom, as Seth Smith reached on a single, moved to third on a Carlos Gonzalez double and finally scored on a Chris Nelson sacrifice fly. 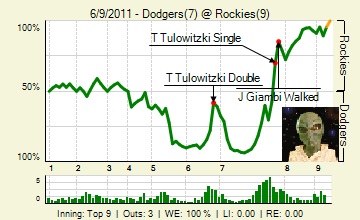 SDcat09 had 290 comments, the most of any game I have ever covered and accounting for 18.4% of the total comments.