After a series against the Chicago White Sox involving 3 close games, the Rockies' frustrations were taken out all over poor Danny Duffy, the Royals' starter.

Rockies bats notched hits up and down the lineup, with only P Juan Nicasio, RF Seth Smith, and C Chris Iannetta failing to provide a baserunner on anything in play. That said, everyone excepting Nicasio did reach base by one form or another, with Smith and Iannetta drawing walks.

Todd Helton had himself a big night at the plate, going 4-for-5 and driving in 2 of the Rockies' 9 runs. Ty Wigginton punched 2 hits of his own, and thanks to the fact that both of his hits stayed in play, the Rockies were able to successfully nail down the win.

But the biggest story of the night was recent acquisition Mark Ellis, who started at 2B and batted 2nd. After a questionable 81 games in Oakland, Ellis made himself quite welcome to the Coors Field Fireworks crowd by going 3-for-5 on the day with 3 RBI, falling just a triple short of the cycle.

In the event you missed it, by the way, Juan Nicasio tossed 8 innings of shutout ball on 111 pitches, striking out 4 and walking 2.

Edgmer Escalona, who is probably only up for the day, tossed a scoreless 9th, allowing one hit. 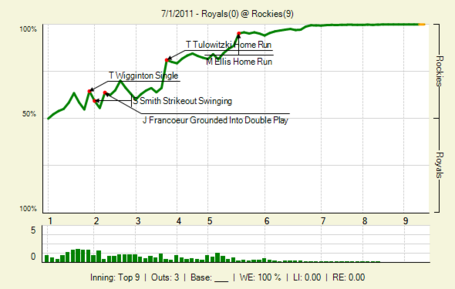