I recently stayed up very late having a heated debate with my siblings about a very important matter: if the Rockies were a Marvel or DC superhero or villain, who would they be? Opinions flew, and it got me thinking. Since Hollywood hasn't gotten around to making that movie about the Rockies (seriously- do they want us to actually win the World Series or something?), I thought it'd be fun to explore some of the possibilities, since it's the freaking All Star Break, and gosh, I'm already bored (why else would I be awake at this hour writing this post, of all things), and don't think I should do another poll like I did last year for two reasons. 1. I have an opinion now. 2. The winning of the poll by Seth Smith jinxed his second half. Sorry, Seth.

Anyway...superhero movies...oh, yeah. So if the next superhero movie was getting cast, who would your favorite Rockie be? Ever thought that a player would play a certain role? Who are the villains? Does good triumph evil? (Of course!) 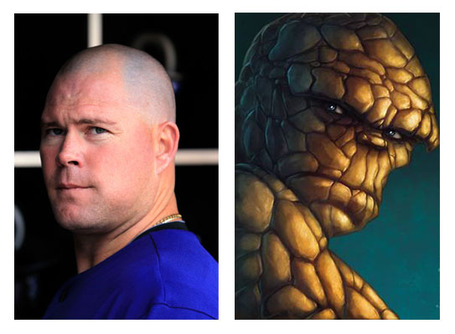 There is no denying the resemblance- except Wiggy might be happier in this picture, and I highly doubt The Thing could ever steal a base. I also doubt Wigginton will ever be part of anything called "The Fantastic Four".

In order to play Wolverine, player must have wolverine-like hair. Ian Stewart was the closest, although he is going bald. Said player must also be stubborn. Now if only Stewart all the Rockies had Wolverine's healing ability... 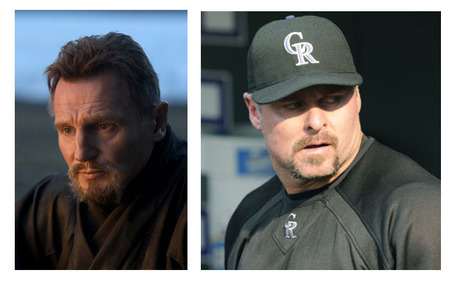 Well, I guess the obvious reasoning is facial hair. But other than that, the protrayal of Ra's al Ghul by the Giambino will be a thicker one. Which is fine, because as long as Giambi can still ninja-fight Batman, the movie will sell. 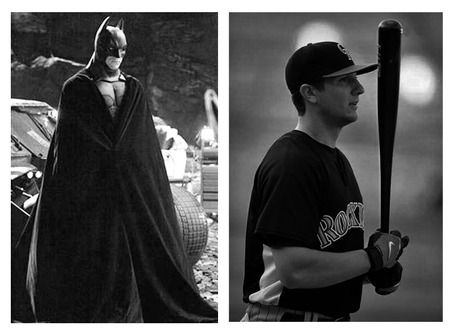 Who better to play the Dark Knight and his secret identity Bruce Wayne than Tulo? They both have the same sort of qualities of confidence/awesomeness, and the glaring fact that they are both human. And just as Batman was trained in ninja ways so he could fight people without those superpowers, Tulo makes incredible plays on the field that make you wonder if he is a ninja. Plus he even has the Batmobile. 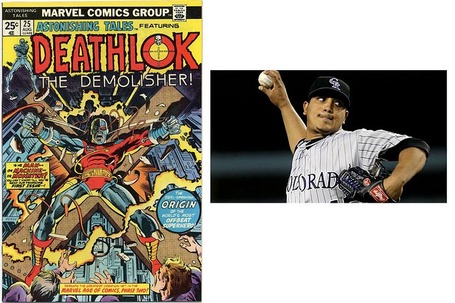 All hail The Machine. Deathlok is a cyborg built by a company called Roxxon. Chacin is a machine built by the Rox. They both have superhuman strength, reflexes, the like. Both will destroy the opposition.

Now Huston Street is the definition of what a classic superhero should be: he has nice flowing superhero hair, good looks, and a job that makes him "save". During the debate, it was suggested that his dark hair be dyed blonde, so he could play Green Arrow, like in Smallville. That was a stupid suggestion, however, and it was really not decided who Street should play (Mr. Fantastic?), which was made harder by the fact that Street is only 5' 8" (maybe not so superhero-y afterall?)

Anyway, the role of the Emerald Archer was given to Aaron Cook eventually. 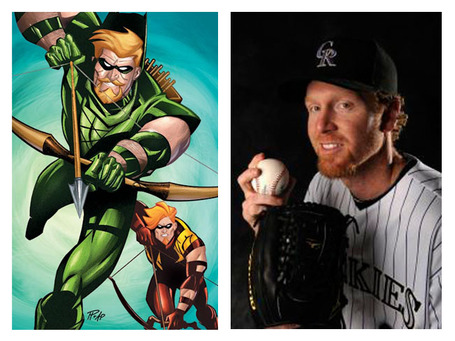 In the Justice League cartoons, Green Arrow is more of a redhead. Ah, remember the days when Cook could pinpoint his sinker, and the opposition would fail? Don't ask who that other dude with the bow and arrow is. 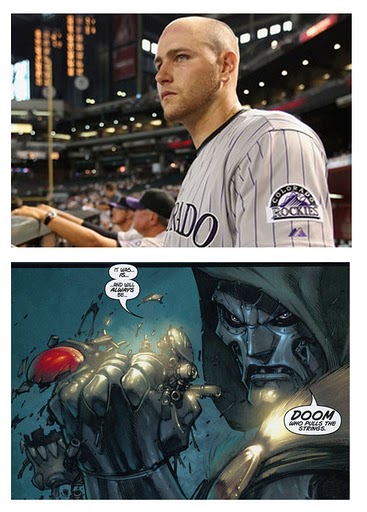 When looking for someone to play The Man of Steel, you need the Superman-like hair, superman-like looks, and superman-like qualities. Seth Smith is perfect, overlooking the fact that the pictures of both doing their super pose above don't really match since Smith is a lefty. Naturally, he would put out his left hand before take-off. But when you look at both, you do think of Truth, Justice, and the American Way. 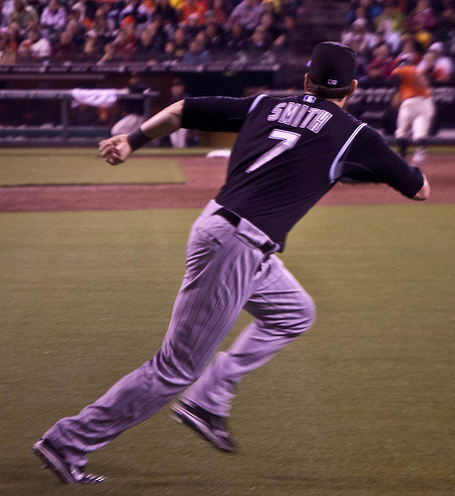 See, here is Smith taking off to go save someone (most likely a pitcher who is about to almost give up an extra base hit). Wait, Seth Smith might actually be Superman...

Wait, what? Yeah, sure, the spikes are similar, but we could only wish Dinger was as cool as Doomsday.

Obviously, there's a lot of players missing here, and it's up to you to cast them. Like who would be Lex Luthor? Lindstrom would make a good one, if he was bald. Or maybe Belisle....

In any case, look out for your 2011 Colorado Rockies on the next comic book movie.

Are the Rockies super awesome or what?