All of that changed tonight.  Adrian Gonzalez put the American League on the board first with a fourth inning solo home run off of Cliff Lee, but the lead wouldn't hold long.  Carlos Beltran and Matt Kemp singled to lead off the bottom half of the inning.  Then, on a 2-2 pitch from CJ Wilson, Prince Fielder unleashed a deep three run home run to left-center field.  Andre Ethier added an RBI single in the fifth inning, and Pablo Sandoval doubled home a run as part of a very good showing by the All-Stars from the NL West.

Troy Tulowitzki, Colorado's All-Star, played into the fifth inning and represented himself quite well.  He put a good swing on a 95mph fastball from Michael Pineda in the third inning, getting under it for a fly ball to center field.  He later led off the fifth inning with a line drive single to right field on a 100mph Jordan Walden fastball before being lifted for a pinch-runner.

Bruce Bochy utilized the Phillies' two-headed monster to start the game, with Roy Halladay and Cliff Lee recording the first eleven outs of the game.  It was the first time teammates were the first two pitchers for an All-Star team since Greg Maddux and Tom Glavine accomplished the feat thirteen years ago.

Giants/NL manager Bruce Bochy certainly used the All-Star game to the Giants' advantage, at least as much as is possible in one game.  While Tim Lincecum, Matt Cain, and Ryan Vogelsong, not a single one of them threw a pitch.  Brian Wilson did record the save in the ninth inning, but Bochy turned to Joel Hanrahan first before an error and single gave the AL a chance.

Meanwhile, the top two teams in the National Leage - the Braves and Phillies - accounted for 6.1 IP, with Halladay, Lee, Jair Jurrjens, Craig Kimbrel and Jonny Venters all taking the mound.

Unless the official scorekeeper changes the automatic ruling, Tyler Clippard was the winning pitcher.  He faced one batter and allowed a single...but Hunter Pence threw out Jose Bautista attempting to score at home plate. 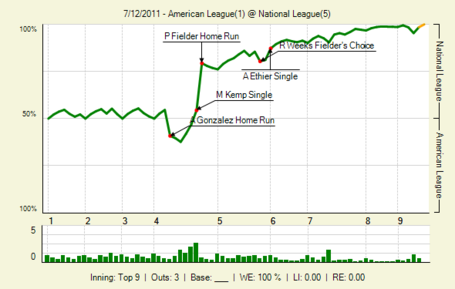