Share All sharing options for: Juan Nicasio Propels Rockies To Another Victory In Which The Rockies Scored 4 Runs

Juan Nicasio was awesome tonight, and there was just no stopping the man. 7 innings of 4-hit ball, 4 strikeouts, and not a single walk.

Nicasio kept Troy Tulowitzki and the Infield Marauders busy, inducing 11 ground balls to only 3 flyouts. Seriously, folks, Nicasio threw like 99% fastballs and accidentally tossed a slider in there that fell for a strike. Or something like that. The man couldn't miss. I don't even know what else to say about him, this awesome start was just what the doctor ordered.

The offense, again, scored 4 runs. 2 runs came off of the bat of Todd Helton, another came from another Tulowitzki double. The first run of the game, however, came from Dexter Fowler and his Wheels of Fire. After hitting a leadoff double, Fowler advanced to 3B on a groundout to SS (yep, he ran with the ball in front of him, and still made it - that's dangerous my friends), and scored on a wild pitch. Fowler came around to score after walking later in the game as well.

The other 2 runs involved Mark Ellis continuing to extend his welcome to Coors with another 2-hit day. Also awesome. 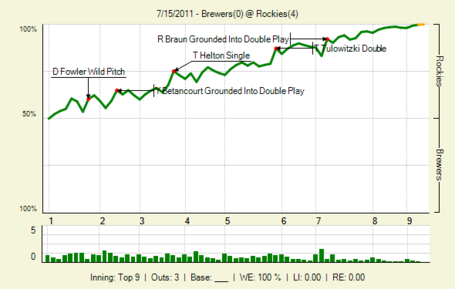