What a C.Rockies of a game... Brewers win

Share All sharing options for: What a C.Rockies of a game... Brewers win

Alright, so first of all, I hate hate hate hate blaming umpiring for losses. There were ways the Rockies could have won this game tonight even with the bad calls that cost them. They could have pitched better, they could have tightened up the defensive lapses that really hurt. The top of the lineup could have figured out Zach Greinke before they would finally break through on the Brewers bullpen.

But of course, since this was a one run loss, 8-7, as a fan of the team, everything seems to come back to this... 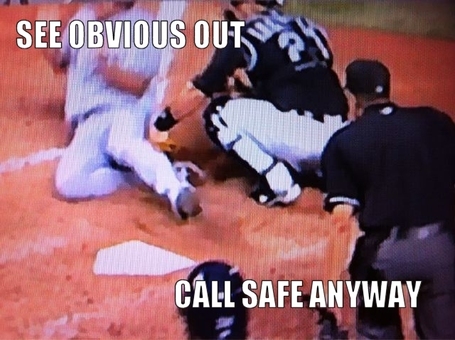 Just what was Cory Blaser looking at if not the tag right in front of his face?

The photo courtesy theshiva from Chris Safran's Twitter stream. There have been games before that the Rockies have lost on calls like this (not typically this obvious, though) there have been games the Rockies have won. Going forward, the same will hold true. The botched call was frustrating, the tossing of Chris Iannetta was a clear sign of an ump not ready for the majors, but at the end of the day, the Rockies will have to somehow regroup and  be ready for another tough contest tomorrow.

Todd Helton and Ian Stewart each had a pair of hits, and Helton drove in three of the Rockies runs. Starter Jhoulys Chacin was mostly effective for six innings, aside from a two run home run given up to Corey Hart, but unraveled with poor command and after getting pulled for Matt Reynolds with the bases loaded, got singed in his ERA by a rare defensive miscue by Helton on a Nyjer Morgan bunt that wound up scoring two runs.

That set the stage for Mark Kotsay's controversial sacrifice fly to Dexter Fowler, as Corey Hart slid into Iannetta's tag but was inexplicably called safe anyway. Afterward, Huston Street gave up a two run HR to Rickie Weeks, and the offense couldn't quite come back to eight runs. If only the Brewers had scored just seven... 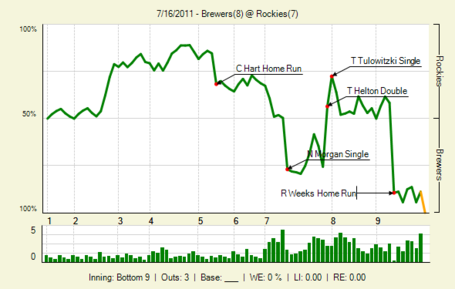