Share All sharing options for: Rockies Extend Sunday Losing Streak to 13 with 4-3 Loss

The set-up was there for a loss. The weak link in Colorado's rotation against the best guy in Milwaukee's, a lineup with a few backups, it was Sunday, etc. To be honest, the Rockies made much more of a game of it than I expected they would as they lost their 50th game of the season this afternoon.

Aaron Cook (0-5) didn't get out of the 5th inning (again), getting knocked around to the tune of 3 runs on 8 hits. At some point the Rockies need to decide that enough is enough with Cook. He's just not a Major League-caliber starter at this point, and the sooner the Rockies realize that the better. Also struggling today was Ian Stewart, who was removed in concert with Cook. Stewart struck out twice and committed two errors on the day.

On the plus side, Jason Giambi had an excellent game as the starter at first (he's done virtually all his damage as a starter this year), blasting an upper deck solo homer (10) as well as a double and two walks. Seth Smith and Ty Wigginton both added multiple hits for Colorado, including a run-scoring double by Wigginton in the ninth that made it 4-3 and gave the Rockies the tying run on 2nd with nobody out.

Unfortunately, the dreaded 4 run barrier proved to be too much for Colorado, as Carlos Gonzalez, Mark Ellis (a questionable PH for Dexter Fowler), and Troy Tulowitzki all failed to advance Wigginton past 2nd. Colorado hasn't had a come-from-behind walk-off this year, but this was probably their best chance yet to do so.

If this Sunday losing streak reaches 15, I'm going on a Game-Wrap strike. 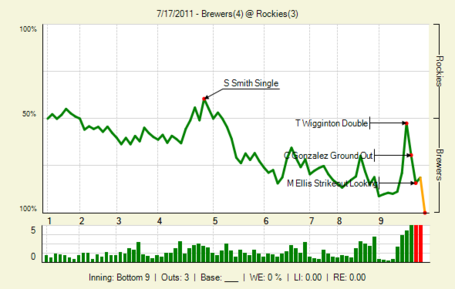