A bizzare play in which Todd Helton lost a lob throw from Ty Wigginton in the sun with two outs and the bases loaded in the second inning kick-started yet another miserable night for the Rockies' defense and pitching staff as they lost their fifth consecutive game to the Braves (and third straight overall) by a score of 7-4.

After a shutdown first inning by Jason Hammel, the Rox put two aboard in the bottom half of the inning, but left with nothing to show for it as Seth Smith grounded out with runners on the corners. Then, in the top of the second, Atlanta loaded the bases on two groundball hits and a walk. After Alex Gonzalez lined into a double play, Hammel intentionally walked Nate McClouth to setup the force play with two outs and Derek Lowe coming up. Hammel induced a soft grounder off the bat of the Atlanta pitcher, but instead of taking the short play and, in turn, keeping the ball out of the sun, Wigginton lobbed it high over to Todd Helton at first, who immediately lost it in the sun. That allowed two runs to score, and the Braves would build on that lead in the coming innings.

The Rockies went away meekly in their half of the second and in the third, Freddie Freeman (this guy again?!) took Hammel deep to center with a runner on base to extend the lead to 4-0. A couple of batters later, Eric Hinske connected for a solo homer into the upper deck in right field to make it 5-0. Todd Helton's third-inning RBI single got the Rockies on the board, but the Braves got that run back against Hammel on an Alex Gonzalez RBI single that plated Hinske, who may not have scored if not for Carlos Gonzalez booting the ball in left field.

After Freeman picked up another RBI to make it 7-1, the Rockies started to rally just a bit. Four singles - three of which were of the bloop variety - helped the Rockies plate three runs in the bottom of the seventh as they chased Lowe and cut the lead to three. However, the magic would end there, as they were unable to add on to that total in the final two innings. Dexter Fowler walked with two outs in the eighth, but pinch-hitter Eliezer Alfonzo would hit a weak comebacker to end the inning. Helton would do the same in the ninth inning, but Troy Tulowitzki was unable to get a ball in play with a runner on base in the ninth inning for the second straight game, striking out (and looking rather bad in the process) to end the night.

Other than the one half inning, this game was not a whole lot of fun to watch. We did our part with the rally caps, at least...

Don't look now, but the Rockies are now double-digits back in the division. Even in mid-July, that spells big trouble. 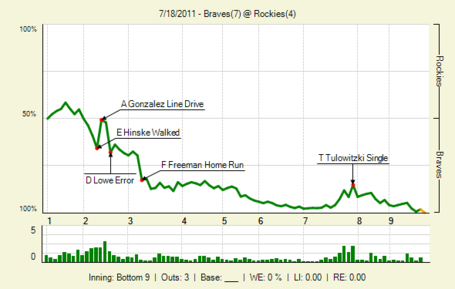 Troy Tulowitzki (despite another ugly ninth inning AB): 2-for-5, RBI

Todd Helton (despite the missed-catch error): 1-for-3, 2 RBI

Jonathan Herrera: 0-for-1, bad-looking backwards K in a pinch-hit AB.

Tomorrow, Ubaldo Jimenez (5-8, 4.08) is the poor sap who is tabbed to take the mound and face a Braves offense that has completely obliterated Rockies pitching in five games this season. He'll be opposed by Brandon Beachy (3-1, 3.21), who is hoping to face guys such as Tulowitzki and Wigginton multiple times with runners on base to improve on his already superb numbers. Will Freeman hit four more home runs? Will Jonny Venters and Craig Kimbrel strike out the Rockies six times on 18 pitches during the eighth and ninth innings? Will Helton and/or Jason Giambi continue to outperform guys who might as well be half their age? Tune in to find out.