It hasn't happened often, but the Rockies finally followed the pre-ordained script of their fervent fans to victory, led by their three stars.  Once the framework was laid, Colorado foolishly took a season's worth of frustration out on Atlanta pitching in one game.

Troy Tulowitzki unloaded a 3-run home run in the first inning against rookie Brandon Beachy on an 8-pitch at-bat.  Carlos Gonzalez followed with a two run home run in the second inning, and Ubaldo Jimenez tied a season-high with nine strikeouts (he did so July 4, also against the Braves).

Perhaps spooked by the early longballs in his Coors debut, the usually well-controlled Beachy walked a career high five batters, four of them after the dual dingers.  It was the first time CarGo and Tulo homered in the same game since June 12.

Seth Smith added and RBI double a two out RBI triple, and Dexter Fowler hit a three-run triple to dead center field as part of his three hits, all left-handed I might add.  Seventeen of his 21 RBI have come from the left side.  Even Ubaldo showed well at the plate, singled after an 8-pitch at-bat and drawing a walk.  In all, Colorado scored in double digits for the seventh time this season, all of them at home.

Jimenez battled control problems early only gave in for one walk on the night despite multiple early deep counts.  Other than two solo home runs from Dan Uggla, Jimenez was strong once again.  He went 6.2 innings and lowered his ERA to 3.93.  He is now on pace for his fourth consecutive season with an ERA under 4.00.  All the other starters in franchise history have combined for just three such seasons. 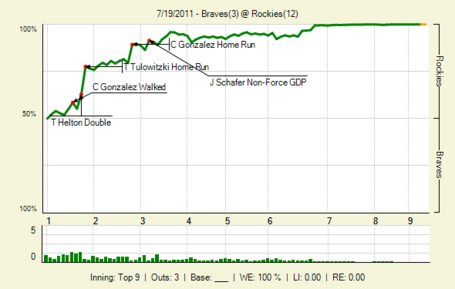