So, uh, so far so good. Mark Ellis has been with the Rockies for two days and has been a key figure in two wins. For the second night in a row, he collected three hits, all doubles this time, and he also scored twice and drove in two runs for the Rockies as they beat the Royals 9-6 on Saturday. In two games Ellis now has as many doubles (4) on the season as any other Rockies second baseman, tying Chris Nelson and Jonathan Herrera. Ellis already has more hits while playing the position than Eric Young, more RBI than Jose Lopez and as many runs driven in while playing second as Nelson all while playing to his typical high standard on defense. In short, he's been everything the Rockies envisioned and considerably more.

Clearly some of this quick hot streak at the plate for Ellis is thanks to a weak and at least somewhat familiar for him opposing team in the Royals. Clearly some is altitude and ballpark inflated in the move from a pitcher's paradise at sea level to a hitter's haven a mile above. Clearly a lot is good fortune that won't always be around, but let's hope at least a portion of it does, because the lineup thrives when there are multiple players at the top capable of causing damage. The Rockies banged out 15 hits against the Royals, three each by Ellis and Chris Iannetta, two apiece by Carlos Gonzalez, Troy Tulowitzki (including his 17th HR of the season), Todd Helton and Seth Smith. The Rockies had seven doubles, a triple by Gonzalez and the Tulo HR.

On the pitching front, Greg Reynolds picked up his third win of the season, but was back to a fifth starter level of effectiveness, as four of eight hits he allowed went for extra bases, including two homeruns, and five Royals in total scored against him in five innings of work. Given the way the ball was flying off the Rockies bats, it might just have been the altitude and weather, but given how Reynolds has had these issues before, it might be more than that. Rex Brothers, Matt Lindstrom, Matt Reynolds, Rafael Betancourt and Huston Street all pitched in relief, allowing one run in the remaining four innings. 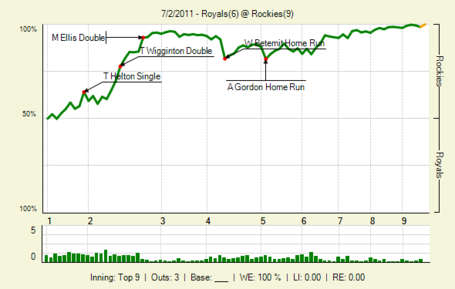