Coors Field Insider: And Now What You've All Been Waiting For - The Hot Dogs

Share All sharing options for: Coors Field Insider: And Now What You've All Been Waiting For - The Hot Dogs

Over the past 9 articles in the Coors Field Insider, we've talked about where to park, where to get snacks outside the park, where to take your kids to play when they get bored INSIDE the park (because come on, kids get bored). We talked about some of my favorite concessions, and how to get sauced after eating said concessions. But something's been missing. What part of ballpark fare has been missing from this whole series? We covered the peanuts, we covered the beers, what's left?

No article series about a ballpark is complete without the hot dogs. The frankfurters. The tubesteaks. The wieners.

However you refer to them, no ballpark is complete without a sausage in a bun. Whether you prefer a Hebrew National cooked at the park or you bring your own Johnsonville Brats in with you, nothing quite rounds out the baseball experience like a hot dog.

The good news is that you have many an option for hot dogs at Coors Field (and given the theme of these articles, is anyone surprised?). The first simple option is just the 1/8th lb dog, the standard issue frank you get out of the 8 pack at the grocery store. The next is effectively the same dog (the Super dog), but it's ramped up to a 1/4 lb dog.

Past that, things get interesting.

The two premier sausages you can get at Coors are the ones in the picture at the top of the article: the Rockie Dog and the Foot Long Bratwurst. Both are buried in a heap of peppers, onions, and sauerkraut. If you remember, onions and I don't get along terribly well, so for my exploration, I opted to pick a bratwurst or Rockie Dog on a later date.

Click past the jump for my adventure in frankfurters.

When I arrived at the field, I was greeted by a smiling usher with a yellow coupon for a dollar hot dog. For a fan of hot dogs, this was obviously a great way to start a night. While waiting for the game to start, I redeemed my dollar hot dog coupon and also the small coke and Super Dog that came with my ticket. So the game hasn't even started yet and I'm already 3/4 of a pound of hot dog in.

I let that sit and ate some of the fresh roasted peanuts that I tend to get over on 23rd and Blake before the game. By about the 6th inning, though, it was time to venture into a more exotic hot dog.

My next stop was the Xtreme Dog stand by the home plate entrance on the main level. 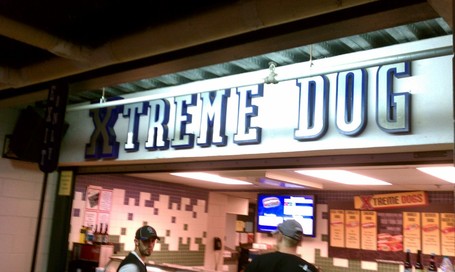 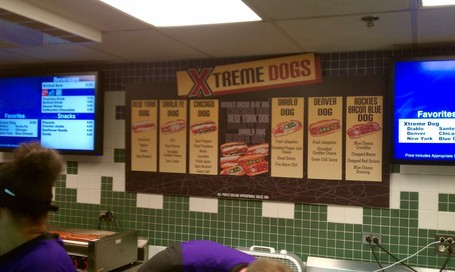 Sorry if the menus are hard to read. You should be able to click on the image for a zoom.

With so many options, I had to wonder how prepared this hot dog stand really was for the variety made available. So I peeked over the counter to take a look at the fixins. 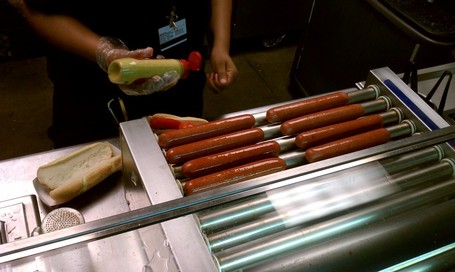 They had 2 or 3 rollers like this jam packed with thick sausages ready for the fixin'. 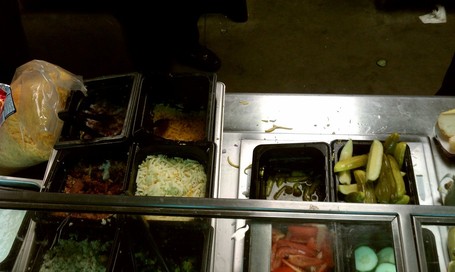 It's a bit of a messy stand, but these people were hauling tail to make sure they got these absurd hot dogs out to the hungry masses.

With so many choices available, I ended up going for a hot dog I didn't think would normally work: the Rockies Bacon Blue Dog.

First, they took one of those massive sausages and plopped it in the bun - nothing surprising there. Then they buried the thing in bleu cheese crumbles and bacon bits, and not just a little garnish. They piled enough on to make any baked potato jealous. After that, they slathered on bleu cheese sauce, just in case I didn't get the concept of bleu cheese on a hot dog. 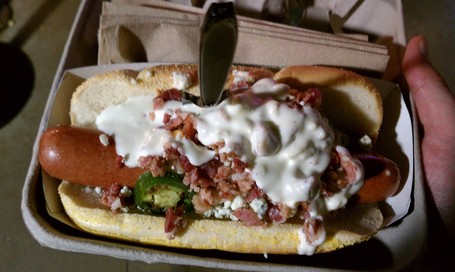 This thing was so messy and amazing they had to give me a fork. Really, any dog worth its weight needs a fork anyhow, am I right? That jalapeno was an accident, though. I put that on my friend's nachos.

I went and got me a cold beer to go with it, as it seemed the right thing to do, and headed back up to my seat.

The next 20 minutes were just a chorus of flavors I never thought would harmonize singing a chorus of deliciousness in my mouth. After eating 2 lesser dogs already that night, I thought for sure that this performance would have to be cut short. But no, I sat through the entire concerto, enjoying every moment, and when it was finished, I sat back astounded that I just ate that much sodium.

Really though, this is just one dog out of the 6 available at this stand, and this particular dog wasn't even the Coors Field Piece de Resistance. If you're going to Coors Field, be sure to try one of these Xtreme Dogs, or even a Rockie Dog or a Footlong Bratwurst. I promise, you won't be disappointed.

And with that, my friends, we conclude the Coors Field Insider series. We might see a few articles pop up here and there as Coors introduces new features and concession options, but for now, I feel we've covered the basics, and for anybody visiting Coors, I hope these 10 articles will give you some guidance on how best to enjoy your time at the Best Park in Baseball and some opportunities to try out something you haven't had before at a ballpark. Thanks for reading, and as always, Go Rockies!