The Rockies put up a string of zeroes in the middle innings Wednesday night, but came through with enough runs at either end of the game to beat the Braves 3-2. Todd Helton started the game with a two run blast in the bottom of the first off Tim Hudson, and then the Rockies bats went silent for seven innings before Carlos Gonzalez finished things with an RBI single scoring Dexter Fowler in the bottom of the ninth.

Juan Nicasio continued his home dominance and pitched seven strong innings, allowing just one run on five hits and a walk, with four strikeouts. He now has a 1.58 ERA in six starts (40 IP) at Coors Field in 2011. Nicasio got some help in a sixth inning that saw back to back to back great plays from infielders Ian Stewart, Mark Ellis and Troy Tulowitzki to get out of a runners on second and third, no out jam. The bullpen, Rex Brothers and Matt Lindstrom allowed a tying run to score in the eighth

Gonzalez, Helton and Fowler were the only Rockies to get on base safely multiple times, Gonzalez and Fowler with two hits apiece (plus an HBP for Fowler) and Helton with the home run and an HBP himself. 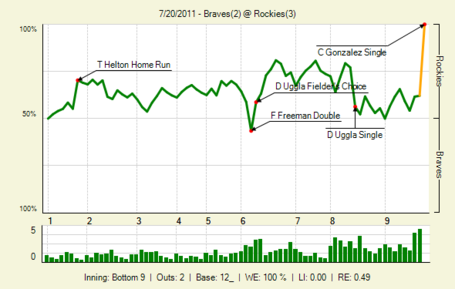