The leading team in this game changed four times, with the Rockies getting off to a four run start in the first two innings, but ending with the Braves breaking the lead open in the seventh inning. Starter Jhoulys Chacin battled control issues, allowing seven walks, four hits and five earned runs over four and a third innings pitched. He also struck out four Braves, three in the first inning while escaping from a two runner, one out jam.

Carlos Gonzalez led off the Rockies offense with his 15th home run of the year. In the second, Dexter Fowler's seventh triple knocked in Ian Stewart and Chris Iannetta. Fowler scored the fourth Rockies run on an attempted squeeze play; Chacin missed the ball at the plate, but Braves catcher Brian McCann also missed the catch, allowing Fowler to get credited for stealing home.

Chacin's control problems began to bubble over in the third. After walking Martin Prado to begin the inning, Jason Heyward hit his tenth home run of the season to cut the Rockies lead in half. A single and two more walks kept the inning alive for Atlanta. Rockies bane Freddie Freeman came around to score on an Alex Gonzalez grounder that was just missed for a double play. Freeman struck again in fifth inning with a game tying solo shot, his fifteenth of the season (six of those fifteen have come against the Rockies; Freeman has only hit home runs against us in the month of July thus far). Brooks Conrad reached in a similar matter to Gonzalez in the third, and after stealing second base, came around to score, bringing the lead to the Braves.

In the fifth inning, Carlos Gonzalez appeared to injure himself while swinging the bat. He left the game and is getting a MRI. No news on those results yet, so check the comments.

The Rockies brought the lead back home in the sixth, when Seth Smith tripled in Troy Tulowitzki. Smith scored on an Iannetta sacrifice fly. The lead would be short-lived. Reliever Matt Reynolds began the seventh inning with a groundout, but after allowing three straight extra base hits (including a solo home run, Conrad's fourth homer of the year) and two runs to score, the lead returned to Atlanta, the final changing of that hand. Matt Lindstrom relieved Reynolds, allowed one inherited runner in Nate McLouth to score, then a run of his own in Wilkin Ramirez, coming home on a Heyward base hit.

Good relief appearances in the game from Matt Belisle, Rex Brothers (who struck out the side in the eighth) and Rafael Betancourt made little to no difference, as the Rockies were unable to produce against Braves relievers; a Ryan Spilborghs walk was all the team could muster together in the ninth inning against closer Craig Kimbrel. Kimbrel nailed down his 30th save of the year, and Reynolds got his second loss.

A 4-4 homestand of treading water was not what we needed after the All Star Break. The team sets out on the road for nine inter-division games, beginning with a trip to Arizona. Tomorrow's game begins at 7:40 PM Mountain. 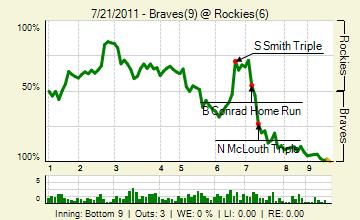