It has not been a very fun year for fans of NL West teams. After seeing their superstar traded to Boston, the Padres have fallen from a 90-win team to a team that is already 10 games below .500...at home.  The Dodgers are enduring one of their worst seasons in decades, on and off the field.  The Rockies have been nowhere near the team they expected to be.

Even the two teams with winning records cannot be satisfied.  The division-leading Giants lost their best offensive player for the season in an ugly home plate collision, while Aubrey Huff, Miguel Tejada, Pat Burrell, Cody Ross, Andres Torres and Freddy Sanchez have all taken precipitous dips with the bat.

Then there are the Diamondbacks, who won just 65 games last year and have surprised by winning 52 of 98 so far in 2011.  They are one special week away from leading the division, so surely Diamondbacks' fans have to be happy now, right?  Well, they aren't immune either.  Wednesday night, Stephen Drew suffered an ugly injury of his own at home plate and is also out for the year.  I refuse to watch the video.  He will need a plate and three screws surgically inserted into his fractured ankle.

Arguably, Drew is the most difficult Diamondback to replace.  There is no one within the organization who can provide good production at shortstop, and the upgrades on the trade market are less than sparse.  Even more important to consider is whether it is worth attempting an upgrade if one comes available.

Kevin Towers doesn't believe in conceding a season, which of course sounds good.  It doesn't mean he has plans to address the loss of Arizona's shortstop.

At 4.5 games behind and still considered "overachieving," the likelihood of Arizona surpassing San Francisco was very real with Stephen Drew, but not at all likely.  The contention window for the Diamondbacks looks to be a strong one, but it does not start in 2011.  Kevin Towers knows this, which is why Kirk Gibson will likely be writing Willie Bloomquist and Cody Ransom at short for the remainder of the season.

The Dodgers and Padres have no shot of taking the division, the haven't had an ounce of magic since Ubaldo Jimenez lost his on Opening Day, and the Diamondbacks are content to hang back and just hope for the best.

At this point, with more than one third of the season left to go, the San Francisco Giants have a firm strangle-hold on a consecutive division title.

You Should Know:  Josh Collmenter is still chugging along, mowing down hitters with a 2.65 ERA and a .204 average against.  You know that "wait until an opponent sees him a second time" theory?"  He has faced an opponent for the second time on three occasions this season, allowing 5 runs in the second outing to both the Giants and Rockies.  But after throwing six shutout innings on three hits in Milwaukee July 6, he turned right around and shutout the Brewers for eight 3-hit innings in his very next start (Monday).  He also struck out a career-high seven.

News:  Max Scherzer is a fine pitcher, but trading him away just keeps looking better and better.  After shutting out the Brewers and defeating Zack Greinke last night, Ian Kennedy improved to 11-3 with a 3.22 ERA   Arizona acquired Kennedy for Scherzer on December 8, 2009, with Arizona also trading Daniel Schlereth and receiving Edwin Jackson.

While E-Jax did little for Arizona (other than throw a no-hitter), he did bring Daniel Hudson (10-5, 3.56) back in trade.  At the time the former trade seemed like a loss, but Arizona certainly appears to have come out very much on top, with the top of their rotation shaped by those two trades.

Kevin Towers remains interested in Jason Isringhausen.  Another possibility is Oakland's Brad Ziegler.  While they hope to acquire a starting pitcher, there aren't many available that are a good fit.  It seems inevitable that Towers acquires a reliever though, given their relative low cost and his obsession with the bullpen.

Kevin Towers says the trade deadline is his least favorite time of the year.  I suppose I could understand that, given the stress, extra work and lack of sleep.  It is just odd to see a public figure claim he dreads the second most important (if not most important) aspect of his job.

Jim McLennan has a fantastic post at AZSnakePit examining very clearly how the Diamondbacks got so much better, and he isn't crediting Kevin Towers.  By examining fWAR for hold over players, players who are no longer on the team, and additions, McLennan pretty clearly found where Arizona made up the ground.  Getting rid of underperforming/bad players was the biggest influence, followed by in-house improvement, with Towers' personnel additions bringing up the rear.

Injuries:  Placed SS Stephen Drew on the 15-day DL with a broken ankle (7/21).  JJ Putz might return next week from elbow tendinitis, and Juan Gutierrez suffered a setback in his attempt to return from shoulder stiffness.

You Should Know:   Dioner Navarro has tied a Gary Sheffield record.  Navarro...Sheffield?  You know this has to be obscure, and it is.  Both Sheffield and Navarro hold the distinction of driving in the lone run in three 1-0 games in one season.

Divisional Change:  Fell back into last place and lost two games to the division leading Giants.

News:  Jon Heyman tweeted that the Dodgers are officially "open for business," ready to commit to selling.  Mike Axisa notes that Hiroki Kuroda is the best starting pitcher available at the trade deadline, assuming Dan O'Dowd won't trade Ubaldo Jimenez.  It might, however, be difficult to get Kuroda to waive his no trade clause.  The right-hander is more comfortable on a sinking ship closer to his homeland, it seems.

Of all the pictures available to make his profile picture, that ridiculous shot is the one that was chosen, intentionally I'm sure.

The Brewers are interested in Jamey Carroll, a move that makes sense for Milwaukee.  Carroll would be a low cost improvement on their shortstop situation.

The Dodgers fired their hitting coach Jeff Pentland Wednesday.  I kind of feel bad for him.  He's like a restaurant owner who only had ingredients to make soupy eggs, soggy fries, and steak.  His cooks whipped out soupy eggs, soggy fries and filet mignon for his customers, but the (mostly) bad dinner was his fault, not the manager who ordered the bad stock.

The Los Angeles Police Department exonerated Giovanni Ramirez, who had been arrested for the beating of Bryan Stow.  In a surprise development, two unnamed men have been charged with the Stow beating in his stead, though no details have come to light for what brought about the change.

Injuries:  Casey Blake fielded groundballs Tuesday, but there is no timetable for his return from an arthritic neck.

You Should Know:  The Padres are not very good at baseball

Divisional Change:   No change in relation to the division leader, but moved back into fourth place by a half game.

News: We have heard plenty about Ryan Ludwick, Heath Bell and Mike Adams as trade targets, but theIndians have a different Padre on their wish list:  Aaron Harang.  Either way, you can be positive San Diego will be trading someone, as GM Jed Hoyer said "It'd be foolish not to get some prospects ... we're not in a position to have untouchables."  Surely Chris Antonetti has heard of PetCo Park..,

While it certainly could be posturing, it appears as if Mike Adams won't be one of the players dealt.  The extremely effective reliever had Hoyer asking for two top 100 prospects in return for the setup man, which has to be considered a bigger dream scenario than anything Dan O'Dowd might request in return for Ubaldo Jimenez.  Still, Adams has prepared himself by applying for a passport, just in case he ends up on an AL team and has to travel to Toronto.

The Padres also will consider not trading Heath Bell, either taking the compensatory draft picks or re-signing him after the season if they don't get a strong return.

Personally, I cannot wait until August 1, when trade speculation on Bell, Adams, Ludwick and company can cease.

Injuries:  Activated SS Jason Bartlett from 15-day DL.  Chase Headley took batting practice and fielded grounders Tuesday, but there is no set timetable for his return.  2B Orlando Hudson left yesterday's game with a neck injury and is day to day.  C Nick Hundley caught a bullpen session Tuesday and should return next month.

You Should Know:  Barry Zito allowed just 3 ER in 21 IP in his first three starts after coming off the DL.  Then....disaster, as he allowed 8 ER on 4 BB and 2 HR at Petco Park Saturday, getting chased in the fourth.  So just like that, the Giants decided to skip Zito's next start.

Divisional Change: Extended their lead in the division by 1.5 games.

News:  The Giants stepped in front of Arizona and acquired one solid middle infielder before Stephen Drew even got injured.  Brian Sabean acquired IF Jeff Keppinger from the Astros the day before the Drew injury for two relief prospects.  He will be playing second base predominantly.

After acquiring Keppinger, Brain Sabean hinted that he was working on a bigger deal with another team, but that deal did not involve Carlos Beltran.  The Giants have been heavily linked to Carlos Beltran in the last week.  It must not have been Michael Cuddyer either, as the Twins apparently won't be trading Cuddyer.  With the recent developments within the division, one has to think Brian Sabean is feeling less pressure to trade for a bat.

The Giants are the only pro baseball team level AAA or higher without a player with 10 HR.  The Rockies have six such players....

It probably isn't a surprise that a Giant ranks 3rd in MLB in FIP.  It might be a surprise to you who it is.

After Tim Lincecum was outdueled 1-0 by Clayton Kershaw for the second time this season, a San Francisco television station posted a baseball image with no understanding of baseball. 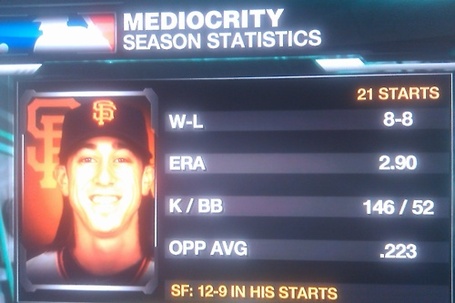 Injuries:  Placed Pat Burrell on the 15-day DL with a mild foot sprain (7/15).  Placed IF Miguel Tejada on the 15-day DL with an abdominal strain (7/19).  Pablo Sandoval is day-to-day with a sore right quad and expects to return tonight.  C Chris Stewart is day-to-day with a head contusion.  Jonathan Sanchez made a rehab start on Sunday.  Aubrey Huff has a sore back and will be given a few days off.