Something about the Diamondbacks. Just about every year, the Diamondbacks are that thorn in the Rockies' side that prevents any kind of success. Now, 2011 has been pretty bereft of success, but tonight was just a good win for the Colorado offense.

Tonight had one thing ringing in it though. The Rockies, crippled as they may be, got that scent of the season being dead. Maybe it's the threat of losing your job. Maybe it's just denying what may soon be viewed as inevitable. Whatever it was, the team kind of gathered up its skirts. All except a couple of individual players.

Most of the lineup added something. Stewart had a PH single, Eric Young Jr had a PH BB, Fowler had himself a 3-hit day. The offense as a whole did well, driving in runs in 5 of 9 innings en route to an 8-4 victory.

Aaron Cook went 6 innings, allowing 4 runs on 8 hits with 2 walks and a strikeout. He also had 11 groundouts to 3 flyouts. Chris Iannetta went 0-for-5 with 2 popups and a GIDP.

Interestingly, I don't know who this hurts or helps much. Iannetta may be auditioning for another club right now. Eric Young, Jr might be just showcasing his talents for trade, same with Ian Stewart, Ryan Spilborghs, Rafael Betancourt, and possibly even Aaron Cook.

0-5 with disastrous outs isn't much of a value-builder.

So depending on who you'd want to get traded or want to keep and those who performed well or underperformed, tonight might have gone great OR terrible, according to your perspective. 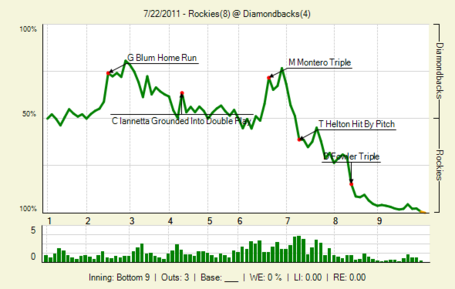 Rox the Casbah had more than double the post count of anyone else. SDCat09 had 195 comments.