Today was just one of those days in which nothing went right for the Colorado Rockies, resulting in a loss. In other words, it was pretty much a normal Sunday afternoon in 2011. Colorado extended its Sunday losing streak to 14 with a meager 5 hit effort off the pitching juggernaut duo Micah Owings and Zach Duke, never advancing a runner past second base thanks in large part to the fact that the majority of the hits were erased by three double plays.

Ubaldo Jimenez only lasted five innings on the mound, and while he struck out eight men in that time, he also allowed five runs on five hits and hit two batters to get the loss (6-9). Justin Upton was the primary Rockie killer today, going 4-4 with two doubles and a broken bat triple that hit off the top of the right-field wall, driving in three runs in the process.

I've tried being optimistic, pessimistic, theistic, nihilistic, and even a little fatalistic when watching them play, but none of these attitudes have helped the Rockies win a Sunday game in the last 97 days. It's been a trying summer for this intrepid writer, that's for sure. 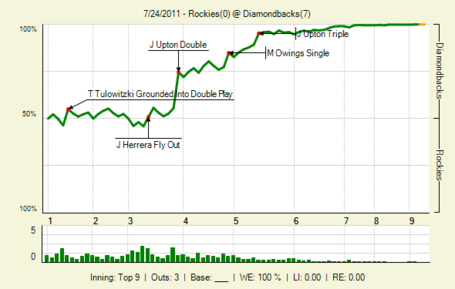