Aaron Miles had two hits and three runs batted in, and Andre Ethier broke a two-week-long homerless drought (and a 5-for-33 slump overall) with a two-run big fly as the Dodgers defeated the Rockies 8-5.

Colorado got the scoring started in the second inning when Dexter Fowler scorched a ball into the hole between first and second to plate Chris Iannetta, who reached on a single earlier in the inning and moved to third on a Juan Nicasio double. However, it was all Dodgers from that point on as Miles and Ethier doubled and homered in succession to give Los Angeles a 3-1 lead. Two more would score in the sixth on a Juan Rivera double and a Dioner Navarro single. The bloodbath continued in the eighth when the Dodger bats BABIP'd recently-recalled Esmil Rogers to death (although, with some control problems, he certainly didn't help himself).

Despite Nicasio's issues, he had pretty decent stuff, striking out five and walking two in 5.2 innings. However, the five runs on six hits suggest his road woes are not behind him.

Troy Tulowitzki walked three times and missed a home run by about two feet in the eighth inning as Tony Gwynn Jr. made a leaping catch in the outfield. And those three hits in the second inning that were mentioned above? They were the only hits the Rockies had in the game until the ninth, when the Dodger bullpen decided to make things interesting by not throwing strikes.

At least the Rox showed some fight at the end, at least until Troy Tulowitzki swung at the first pitch of his at-bat, - at a ball above the letters, no less - and popped out with the bases loaded. Ugh...truly a battle of ineptitude in that last inning. To top it all off, Jason Giambi left the game with an apparent leg injury after reaching on an error by Jamey Carroll. We'll have to keep a close eye on that, as it could seriously hamper any trade value he may have had. 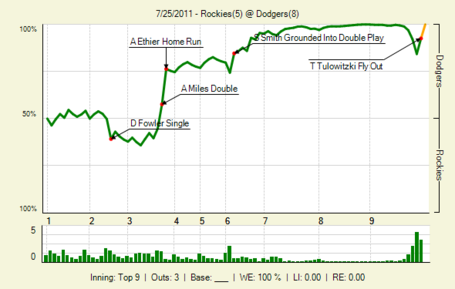 Tomorrow, Jhoulys Chacin will look to get back on track after a bad seven-walk outing against the Braves last time out. Unfortunately for him, he'll have to face Clayton Kershaw. Outlook =/= good.