Ty Wigginton dropped a routine fly ball for an error to lead off the fourth inning.  After a walk to Andre Ethier, Matt Kemp doubled home two and came around to score on a sacrifice fly.  In the top of the first inning, the Rockies got a base-runner on an error and a walk and had two men in scoring position with less than two outs.    They did not score.

That is about all you need to know, really.  Jhoulys Chacin was charged with three runs in six innings, though only one was earned thanks to Wigginton's error.  That one earned run is the only one the Dodgers have scored against him in 21 IP this season.  He allowed just three hits to Los Angeles on the night, but more importantly, he walked just one batter.

The Rockies had their opportunities against Kershaw, as they managed 11 baserunners against the ace before he left with a season-high 125 pitches in the seventh inning.  They went 1-for-12 with runners in scoring position on the night. That one hit was an RBI single for Todd Helton, who drove in the Rockies' other run with a groundout.  He also walked. 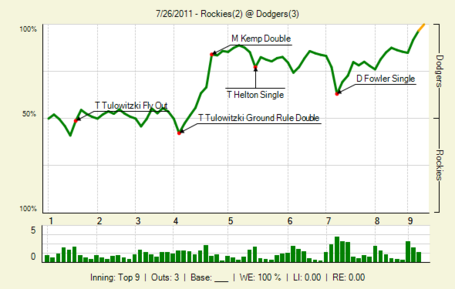