Share All sharing options for: Cook stops Rockies sinking by finding his sinker, beats Dodgers as team remains in third

Aaron Cook pitched seven scoreless innings, allowed six hits and two walks and registered two strikeouts to go along with 16 groundouts as his sinker carried the Rockies to a three to one win over the Dodgers on Wednesday. For the Rockies, the win snapped a four game losing streak and kept them in front of Los Angeles in a battle that's only for pride at this point. For Cook, the start marked his best of the season, and perhaps an unwelcome return to the time when he was counted on to stop the Rockies bleeding in the standings.

The heart of the Rockies lineup did the most damage at the plate. The Rockies took awhile to break through on Dodgers starter Hiroki Kuroda, but scored their first run in the fifth inning when Troy Tulowitzki singled home Eric Young Jr. Two innings later, after a Tulowitzki double and intentional walk to Seth Smith, Ty Wigginton doubled in Tulo for the Rockies second run. Tulowitzki, Smith and Wigginton, the 3-4-5 hitters in Jim Tracy's lineup, finished the night with six hits and four walks (with two intentional to Smith.) Dexter Fowler also continued his strong play since returning from AAA, adding a pair of hits to have seven total for the series, stealing a base and scoring the Rockies last run on a Tulowitzki single in the ninth.

Rex Brothers and Huston Street pitched the eighth and ninth, respectively to close out the victory, with Street allowing a solo home run to Rod Barajas with one out in the bottom of the ninth for the Dodgers only score.

The win kept the Rockies ahead of the Dodgers for third place in the NL West, not that this would be an accomplishment to be particularly proud of in 2011. 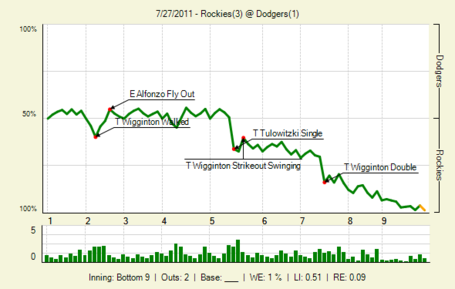