It was a Sunday like the last 10 Sundays for the Rockies, which is to say it was a losing Sunday. This particular Sunday might have been more damaging than the ones preceding it however, as Colorado CF Carlos Gonzalez left the game with a right wrist injury after making a nice running catch against the wall. Fortunately, the injury was diagnosed as a wrist contusion, meaning that CarGo will be listed as day to day. When I saw the play I thought the wrist was broken (meaning 4-6 weeks out), so I guess the news was pretty good considering the alternatives.

Every pitcher for Colorado except newly called-up Eric Stults was pretty bad today, especially starter Jason Hammel and gas can Matt Belisle, but at least CarGo came to play, delivering a six RBI day -- three on a bases-clearing double in the fifth and three on a 3 run bomb in the sixth (13). The 2-4 night raised CarGo's batting line this year to .296/.363/.497 -- a quietly excellent first half. Newly acquired second-baseman Mark Ellis continued his scorching Colorado debut with another multi-hit effort, including a two-run homer in the 5th.

It's not like it mattered much with an eight run deficit, but the disadvantages of having an extra-large bullpen were on display today as the Rockies ran out of position players, giving us the pleasure of seeing Clayton Mortensen and Aaron Cook hit when they traditionally would not.

The loss drops Colorado two games below .500 and drops their record on Sundays to 2-11 -- yes, unfortunately this losing streak on my game recaps does go to 11. Colorado finished Interleague play with a 8-7 record, doing their part for the NL against what was overall a tough slate. The Rockies will get the chance to finish strong, but they will have to do it on the road, with seven games against NL East opponents Atlanta and Washington all that remains before the All-Star Break. 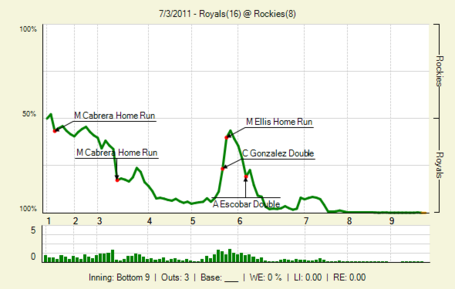