Share All sharing options for: Rockies rally to save the Chief in Ubaldo's last start for team

Ubaldo Jimenez started the game, and then he was traded.

Troy Tulowitzki hit his 20th home run of the season. Eliezer Alfonzo hit a grand slam. Esmil Rogers pitched brilliantly after Jimenez was pulled. Chris Nelson, starting at second, had a three hit game in the National League's least friendly hitting environment. Ian Stewart and Dexter Fowler got on multiple times themselves. Rex Brothers and Matt Lindstrom were dynamite out of the bullpen. The Rockies won 10-6. There was so much to be pleased with the Rockies performance tonight in terms of the Rockies future. And yet it's the present that hangs like a shroud over everything.

The greatest pitcher in Rockies history will no longer be with the team tomorrow. He has flown to Cleveland to take a physical. He will wear an Indians uniform next week. His start today was poor, a function of the distraction surrounding his pending move, but his heart remains large.

Ubaldo, you will always be remembered here, your deeds for the Rockies will grow bigger with time, because of the kind of person you are. We will write them large in our storybook and your legend will expand, never to be forgotten. Thank you. Good luck to you in Cleveland with the Indians, and if you ever do decide to return to pitch in Colorado, you will be welcome. 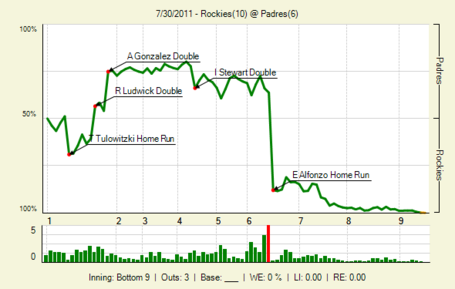