The Colorado Rockies certainly didn't receive the fireworks they expected in this 4-1 loss to the Atlanta Braves on Independence Day. There were two home runs all right, but Freddie Freeman had to go and hit them for the Braves. No, the big bang for the Rockies in this game was the loss of Troy Tulowitzki in the fourth inning.

Well, I wouldn't exactly call it a bang. It was actually lame, since Tulo did come up with a right quad injury while running to first base on an inning-ending double play. He left the game and was diagnosed with right quad stiffness, not serious compared to his 2008 quad tear. He is day-to-day and will likely sit on Tuesday.

Ubaldo Jimenez looked good by sitting consistently in the mid-90s. However, he worked up his pitch count to 117 pitches when he left after 5 1/3 innings. But this wasn't one of those games which saw him walk five-plus batters. Indeed, he walked just one and struck out nine. He allowed the first of Freddie Freeman's two home runs in the first inning, which put the team down 2-0. He left the game right away Jason Heyward doubled in Brian McCann.

Rex Brothers walked a tight line when he replaced Jimenez. With Heyward on second, Dan Uggla drew a walk off Brothers. Chris Iannetta failed to come up with the ball during Brooks Conrad's at-bat, advancing both runners, but Conrad struck out eventually. Nate McLouth walked to load the bases, only to see Braves starter Tommy Hanson strike out to end the inning.

Hanson was dealing out there on the mound, holding the Rockies to one run on four hits in seven innings. Todd Helton singled in Mark Ellis for the team's only score. Jonny Venters and Craig Kimbrel held the Rockies hitless for the final two innings, the latter closing out his 25th save. 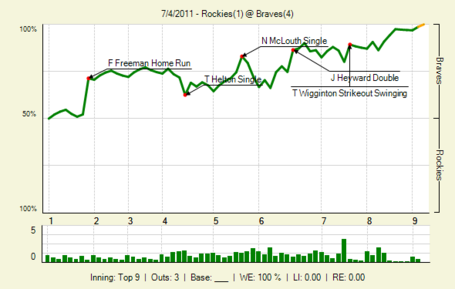