In what was possibly the best matchup of the series, Jhoulys Chacin vs Derek Lowe, the Rockies were unable to strike hard enough and often enough to overcome Derek Lowe and the Braves' bullpen.

Chacin, whose weakness now and going forward is and will be wildness, walked a (tied for) career-high 6 batters in his 5 innings of work, along with 4 hits and 4 runs, including a 2nd inning bomb off of the bat of - you guessed it - Freddie Freeman.

The Rockies outhit the Braves 9 to 7 tonight, but the Braves were able to get the big hits when they counted, including a bases-clearing double by Derek Lowe to push the Braves up to a 4-0 lead in the 4th inning.

The Rockies did fight their way back, however, notching 2 runs in the 5th and another in the 6th, but ultimately it wasn't enough, as the strong end of that Braves' bullpen is borderline untouchable, if Jonny Venters' strikeouts of Chris Iannetta and Jason Giambi were apt indicators.

There was some questionable usage of pinch hitters, I might add. In the 6th inning, the Rockies had runners on 1st and 2nd with 1 out. Ian Stewart struck out against George Sherrill (who was brought in specifically to face him - it's sad how much of a given an out with Ian Stewart is against lefties) on 3 pitches. Given Stewart's struggles vs any lefty, I personally would've just tried to get Stewart to lay down a bunt. But that really isn't the criticism in question, swinging away might've been just as productive.

After Stewart struck out, Cory Gearrin was brought in to face Chris Iannetta and the pitchers' spot in the lineup. Iannetta singled on a 3-2 pitch through the hole at 3B bringing home Seth Smith and moving Mark Ellis (who had 3 hits on the day) to 2B. With a righty on the mound and the Rockies within 1 run, Tracy decided to send up Ryan Spilborghs to pinch hit. While this may not seem like a miserable option in the early going, Gearrin is one of the weaker pitchers in the Braves' bullpen, and this may have been the perfect opportunity to play the Jason Giambi card. Not to say that Giambi would've assuredly gotten on base, but the left-on-right matchup at least favored the batter, and might've forced manager Fredi Gonzalez to burn another lefty in either Jonny Venters or Eric O'Flaherty.

Alas, Spilborghs struck out, and the Braves tacked on another run in the bottom of the 6th to bring the score to 5-3.

Coming into the 8th inning, Venters relieved O'Flaherty to face Smith, Ellis, and Stewart. Smith walked on a full count, Ellis singled on a full count, Ian Stewart grounded to Dan Uggla in what SHOULD have been a tailor-made double play. Instead, Uggla bobbled the ball, and the play worked as well as a sacrifice, moving Smith and Ellis to 3B and 2B, respectively. Down 2 runs in a prime position to at least take another chip off of Atlanta's lead, Iannetta struck out looking on 3 absolutely masterful pitches from Venters (seriously, Michelangelo himself didn't paint that well), bringing up the pitchers' slot again. Having already burned his last non-catcher RHB, Tracy sent up Jason Giambi to face one of the tougher lefty relievers in baseball.

Down 1-2 in the count after fouling off one, Giambi's knees were buckled by a fastball that cruised directly down the middle of the zone.

Now, the question for me was why did Tracy let one of the Rockies' weakest hitters face a same handed pitcher in a good scoring situation? The actual usage of Giambi in the 8th wasn't so much of a question, as there pretty much wasn't anyone left but Troy Tulowitzki and Carlos Gonzalez, who were understandably unavailable. Is there that much of an onus on Jason Giambi that he HAS to be used in the 8th or later? It's obviously impossible to say whether or not the game would've turned out any different had Giambi and Spilborghs' PAs been flipflopped. But at least playing handedness would've made for a better matchup.

Having a card like Giambi in your deck is always a bit dangerous. On one hand, you always have a bat that can send one over the fence ready to use whenever. On the other hand, fear of using it too early might lead one to hold that card for too long when the higher leverage situation happens earlier in the game than expected.

This isn't to put the loss on Tracy, but it's a trend that has a lot of fans raising an eyebrow - or worse. 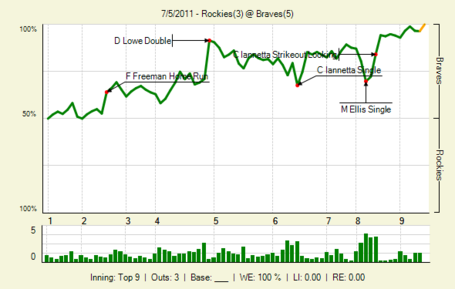