As if the first three games of the series weren't ugly enough, the Braves chose to pound down on the Rockies one more time before they got a chance to escape North to Washington DC. After minor but debilitating injuries to Carlos Gonzalez and Troy Tulowitzki over the past few days, rookie outfielder Charlie Blackmon fractured his foot while rounding second base in the third inning. This will sideline him for at least a month, and likely more if you consider rehab assignments and potential setbacks with healing. This is the second straight season where the Rockies have dealt with several significant injuries in a row. Cole Garner had been traveling with the team after his optional assignment in case the health of Gonzalez or Tulowitzki turned for the worse, but was sent back to AAA this morning. Looks like he may be getting right back on the plane.

As for the game, it won't be pleasant to summarize. The Rockies got an early run as first baseman Jason Giambi knocked in shortstop Jonathan Herrera, who had walked earlier in the top of the first. The Rockies managed another run in the third inning, as Ty Wigginton (pinch running for the injured Blackmon) scored, also off the bat of Giambi. Unfortunately, Atlanta starter Tim Hudson was mostly effective through the rest of the game, giving up five total hits and three walks over seven and a third innings pitched. He struck out three. A third earned run was charged to Hudson in the eighth when second baseman Mark Ellis scored from third base on a wild pitch.

The Braves overtook the Rockies in the bottom of the third, as Rockies starter Juan Nicasio had a meltdown that would send him out of the game after only throwing two and a third innings. The inning began with six straight hits, including a three run home run from Atlanta first baseman Freddie Freeman. Nicasio would only net one out in the inning (officially, as it appeared that he had successfully executed a pickoff at second base on center fielder Jordan Schafer) before being replaced by Eric Stults. Five runs would score in the inning, all charged to Nicasio, with Atlanta putting up a sixth in the fifth inning when right fielder Jason Heyward hit a solo home run off of Stults. Stults threw three and a third innings before yielding to Matt Reynolds, who threw one and a third.

The Rockies threatened in the eighth, with the bases loaded and one out, but were only able to score the one aforementioned wild pitch run. After pinch hitter Todd Helton walked to load the bases again, this time with two outs, Wigginton struck out on a check swing against Jonny Venters, who bailed out Hudson and Eric O'Flaherty from being charged with further damage.

Rafael Betancourt allowed one hit and struck out two Braves in the eighth inning. The Rockies went quietly in the ninth against Atlanta closer Craig Kimbrel in the ninth, who got his third save of the series. Nicasio gets the second loss of his season/career.

I don't usually add a Comment of the Day, but I found this one particularly apt.

Yeah. My Transactions Notes article for the week will be posted at 4:00. The Rockies move on to Washington for a game tomorrow at 5:05 PM Mountain Time, with Jason Hammel taking on former Rockie Jason Marquis John Lannan. Battle of the Jasons!

Things after the jump. 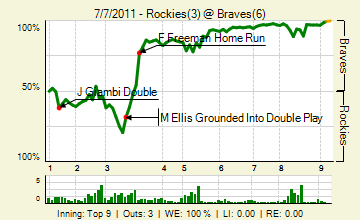