The bad news from this game is that the Rockies scored just two runs, leaving it painfully obvious that their road woes on offense continue. The good news is that two was all they needed as Ubaldo Jimenez pitched a gem and led them to the two to one win victory over the Nationals and a badly needed series win in Washington after getting swept in Atlanta earlier this week.

Jimenez pitched eight innings, carried a perfect game into the fifth until Michael Morse broke it up with a single, and struck out eight to break Pedro Astacio's career record for K's by a Rockies pitcher, finishing the night at 750.

Todd Helton continued his remarkable renaissance season by driving in both runs, one on a solo home run in the fourth inning, the second on a groundout to score Mark Ellis an inning later. Helton also doubled, his 544th in his career, moving him ahead of Tony Gwynn for 25th on the all time MLB list, and his six total bases inched him closer to 4000 for his career with 3964.

Huston Street pitched into a jam and then out of it, and collected his 26th save of the season. The Rockies play the final game of the series and road trip tomorrow before getting a rest with the All-Star break. 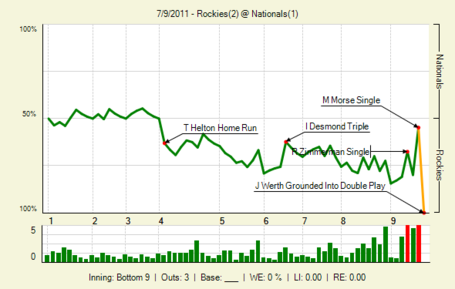