The Phillies Played a Game Against the Rockies at Coors Field. You Know What Happened.

Share All sharing options for: The Phillies Played a Game Against the Rockies at Coors Field. You Know What Happened.

No offense to John Mayberry, but I could have probably hit a home run in this situation if I had the same pitch thrown to me eight consecutive times, too. Unbelievable.

There were a few bright spots in this game (Seth Smith and Chris Iannetta's homers, Jhoulys Chacin's good start), but they were undone by, in my opinion, four things:

1. See the above graphic.
2. Jim Tracy calls for a bunt with Iannetta at the plate with a runner on and nobody out.
3. Jim Tracy proceeds to use Jonathan Herrera as a pinch hitter with one out and a runner in scoring position, while a future Hall Of Famer wastes away on the bench.
4. I hate Shane Victorino.

I don't really have anything more to say about this one. 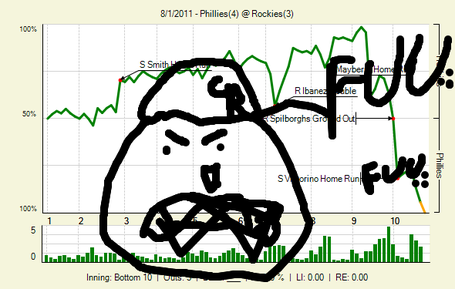 Another completely deflating loss to the Phillies will kick off at 6:40 PM MT tomorrow, so make sure you tune in to see that. As for me, I'll be doing something useful with my time - watching Torche, Big Business, and Helms Alee shred the night away while I get sloshed.