With their top ten draft spot in 2012 in jeopardy, the Rockies came through in the nick of time by grounding into several clutch double plays and running into outs just when all seemed won and scores certain, and instead preserved the 3-2 loss to the Reds. With the Reds and Pirates both winning, the Rockies can rest easy that they can actually win the four game series against Cincinnati with a victory tomorrow, but still be behind overall in the standings.

Kevin Millwood pitched well the first time through the Reds lineup, but got into trouble on the second cycle, as he allowed solo home runs to Edgar Renteria and Jay Bruce, and finally the third time through gave up the game winning shot to Joey Votto. Allowing HR's to Votto and Bruce in that ballpark is somewhat defensible, the Renteria shot is a little trickier to justify, but all in all the performance was about as much as the Rockies could have hoped for from a 12th starter.

As for the offense, I don't really know where to begin with an explanation that doesn't involve the dark arts (no, I'm not at all serious with the lede) as the Rockies got plenty of hits, thirteen in all, but couldn't come up with the timely strike, and ground into four double plays on the night. Dexter Fowler, Chris Nelson, Troy Tulowitzki, Todd Helton and Seth Smith all had two hit games, but right in between Nelson and Tulo in the lineup was Carlos Gonzalez, who went 0 for 4 with two of the Rockies four GIDP's. 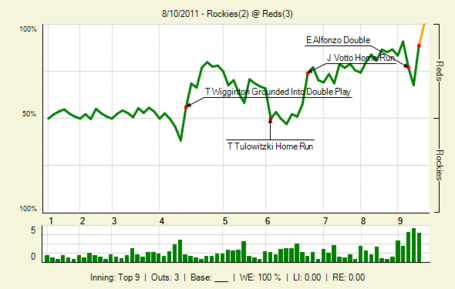