How do you wrap up the most uneventful baseball game ever played? Well, I could start with a hyperbolic title.... check. A goofy picture with no real significance to the game.... check. Filling space with a list? Triple check. Also list random insignificant facts about the game. Hey everyone! Every pitcher in the game has a last name starting with C!

Jhoulys Chacin was the obvious bright spot of the game, pitching what seems like the third or fourth complete game loss of the year for the Rockies. If I hadn't awakened so early, maybe I'd have been inspired to research that. Chacin allowed two earned runs, both in a shaky first inning that saw Chacin yield four straight hits and a walk after getting the first two outs, over eight innings pitched. He allowed six hits and three walks while striking out nine, all just to get stuck with his ninth loss of the year.

Remember in May when Troy Tulowitzki wouldn't let Jim Tracy sit him come hell or high water? Well, I suppose that when you've reached the August doldrums of a disappointing season, keeping your legs pain free becomes a bit more of a priority when compared to winning baseball games. Tulo apparently asked for the day off, and Jim Tracy jumped for joy at the chance to pull out his Lineup Sorting Hat. 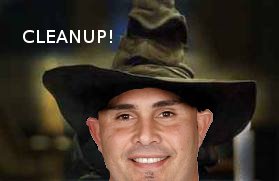 The Rockies got give hits in the game, including Seth Smith's 12th homer of the year (one quarter of Smith's home runs have come over the past series), a solo shot in the ninth off of Cincinnati closer Francisco Cordero, which represented the only run of the game for the Rockies. Mark Ellis' two singles and a walk was just about the only other offensive highlight from the Rockies perspective. The strange lineup struck out nine times against starter Johnny Cueto, including three from Chris Nelson. The Rockies continue their immense difficulties in both day games and getaway games (though those two are often the same thing).

I'm not sure how much more there is to say, other than I might as well have been sleeping during that game. I probably would have been more productive. 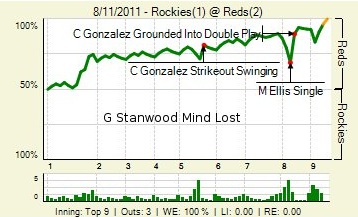