Where was this three months ago? Hammel solid, Gonzalez drives in four as Rockies rout Cardinals.

Share All sharing options for: Where was this three months ago? Hammel solid, Gonzalez drives in four as Rockies rout Cardinals.

This is what 2011 should have looked like. The leadoff hitters getting ducks on the pond for the heart of the order to drive in. Carlos Gonzalez hitting three run dingers. Jason Hammel shutting down tough lineups. The bullpen coming in when the starter finally begins to sway and locking the lead down. The Rockies defense putting in the kind of performance that could back up a pitch to contact starter. A 6-1 victory on the road against a contending team. Yep, everything we kind of hoped would show up for most of the season did show up for one night tonight. Sigh.

Still, it was nice to see Hammel effective again, albeit not dominant with five hits and three walks but just one strikeout in the victory. It's nice to have a new #5 that likes hitting in St. Louis as much as the old #5 did (and of course does.) Nights like this give hope that relatively few changes are required to make the Rockies a contending team again.

Todd Helton's two RBI on a double gave him 1301 for his career, passing Eddie Collins for 105th on the all time list. There's a cluster of a dozen players between 1300 and 1311 RBI, including Hall of Famers like Collins, Roberto Clemente and Paul Molitor, as well as Helton's former teammate Larry Walker and the guy manning first on the opposing team tonight, so Helton will be moving up that list rapidly with his next few ribbies. The double, of course, adds to what will wind up being one of his most impressive career tallies, as he now has 551, still 24th among all MLB hitters. 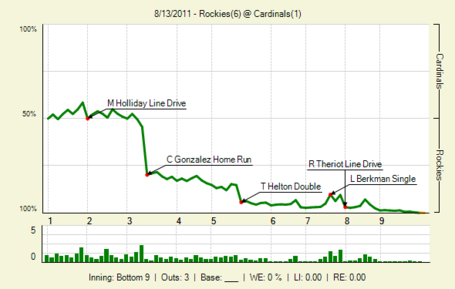