119 days. That's how long it's been since Colorado won on Sunday -- 17 weeks all told. The last time that I was able to affix the "winning" tag to the game wrap, as I am wont to do when the Rockies emerge victorious. 17 weeks since I was a Homer, chronicling the glorious tales of Hellenistic victory. Methinks the last 17 weeks have turned me more into a baleful Eeyore, growing more cynical and morose with each loss.

The omens were poor before the game, as Chris Nelson (he of Free Chris Nelson fame) did no favors to his reputation with management when he broke 3B coach Rich Dauer's nose during a double play drill. Even so, this loss started off with such promise, as Mark Ellis homered (3) and Troy Tulowitzki drove in Carlos Gonzalez for an early 2-0 lead. Unfortunately, Chris Iannetta struck out the with the bases loaded, merely the beginning of the many good men the Rockies would abandon on the basepaths.

That champion of winning baseball, Esmil Rogers, barely made it through 5 innings, walking 7 men on the night and allowing 6 hits besides to earn the loss (6-2, 6.00 ERA). He was given a nice lead, but he promptly gave it up in the first inning on an Albert Pujols homer, and then he lost it for good on two two-out doubles.

Those 4 runs would be all St. Louis would need, because the Rockies left 9 men on base and hit into 3 double plays on the night. Most grievous, though, was the top of the 7th. Down 4-2, Colorado had a chance to pull even or ahead with the bases loaded, one out, and Tulo at the plate. However, both he and Todd Helton failed to even put the ball in play and Colorado's hopes were dashed.

But never fear, denizens of Purple Row! Next week, our long-suffering nightmare shall be at an end, as I bestir myself from my lair to attend my first Sunday baseball game since the Alan Johnson game. Yes, the game the Rockies defeated the Cubs in back when all was well and the pregnant promise of spring still fill the hearts and minds of Rockies fans with great cheer.

Colorado is 5-1 when I attend this year -- when this good fortune meets the ill fortune brought on by 17 losing game wraps in a row...well, it would be fair to say that I am crossing the streams. Let's hope that our foe is more pleasant than a giant Stay-Puft marshmellow man.

The usual pish-posh after the fold. 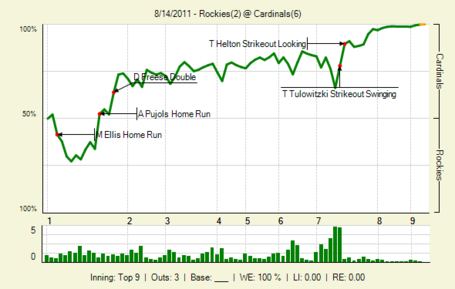