With that monster 2011 once again rearing its ugly head on a pleasant mid-August evening at Coors Field, tonight's game looked like it was going to play out just as so many others had before it. However, with two outs and nobody on in the ninth inning, 2010 finally made an appearance and alas, sent the hometown fans away happy with a walk-off three-run homer off the bat of Jason Giambi.

The inning started uneventfully, as pinch-hitter Mark Ellis flied out to right field and Eric Young Jr. grounded out to shortstop. Down to his final strike, Dexter Fowler got the ol' bat on the ball and blooped a single into shallow centerfield. Of course, that jerk 2011 carried Dex way off of first base and tripped him, causing Fowler to get hung up between first and second. However, 2010 carried Greg Dobbs' throw wide of first base which allowed Fowler to get to second safely. The play was scored a double. Carlos Gonzalez stepped up to the plate next, and lined the first pitch he saw from Marlins' closer Leo Nunez down the right field line, improbably tying the ballgame. For some reason, Jack McKeon elected to pass on the situationally-inept Troy Tulowitzki in favor of Jason Giambi. McKeon would bring in Randy Choate for the left-on-left matchup, but on the fourth pitch of the at-bat Giambi lined a hanging slider over the out-of-town scoreboard in right.

Of course, in typical 2011 fashion, the Rockies blew an abundance of chances to score runs throughout the game. In the fifth inning, Fowler tripled with one out only to be left on third by Gonzalez (pop out) and Tulowitzki (strikeout). The next inning, Jim Tracy elected to leave Seth Smith in to face a lefty in a pinch-hit situation (I know you don't want to burn a guy, but really?), and predictably Smith struck out with two runners in scoring position to end the inning (though he did see seven pitches). There was more to come, as Ty Wigginton was left in to pinch hit for Jonathan Herrera in a right-on-right situation against Nunez in the bottom of the eighth with a runner in scoring position, and Wigginton proceeded to strike out with Todd Helton on the bench.

Regardless, the guys fought through the tight grasp that 2011 had around their throats and finally broke through, reminding fans just how fun this team can be when they get it right. 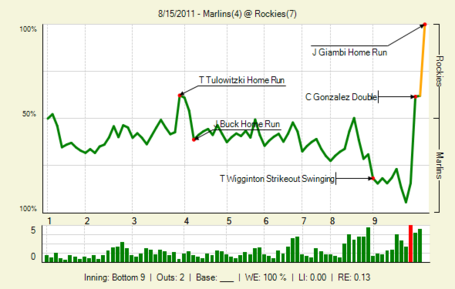 In addition, Chris Nelson had three hits, and Rex Brothers went an inning and a third and struck out one. Kevin Millwood allowed two more home runs in six innings (and four runs in all).

Jhoulys Chacin will toe the rubber tomorrow for the Rockies, with Anibal Sanchez (who one-hit the Rox in Miami earlier this season) going for the Marlins. Should be a good one. Let's hope 2010 sticks around for a little while.