The last time the Rockies faced Anibal Sanchez, they were very nearly no-hit.  That bid ended early, and Colorado skated past the thread with an eight hit night Tuesday at Coors Field.  Even more impressive, four of those left the yard.

The four most notorious Rockies sluggers were in on the action.  Troy Tulowitzki and Seth Smith each smacked a solo shot in the second inning and Carlos Gonzalez went down to turn a breaking ball into a laser solo shot into the right field second deck in the fourth.  Those home runs might have done more damage, but the tablesetters (Dexter Fowler and Mark Ellis) went 0-for-9 with 6 K's on the night.

Down 6-3 in the ninth inning with one out and one on, Jim Tracy elected to eschew his hard and fast rule, making an exception of pinch-hitting a backup catcher with Eliezer Alfonzo in the pitcher's spot.  One popout later, Jason Giambi pinch hit for Chris Iannetta, one night after his walk off home run.

The Giambino did indeed go yard, firing a line drive just past the out of town scoreboard in right field into the Rockies' bullpen.  Of course, the Rockies still trailed by one, and Giambi's home run only improved the Rockies win probability by 3.8%.  Two batters later, the Rockies lost.

Four home runs and five runs is a strong showing against Sanchez and closer Leo Nunez, especially considering the difficulty the Rockies had in generating rallies.  The loss fell on ace-in-training Jhoulys Chacin, whose wildness allowed the Marlins to bat around in the first inning for a three run frame.  Extra base hits by Jose Lopez and Bryan Peterson led to two runs in the fourth.

On a night in which erstwhile ace Ubaldo Jimenez allowed nine hits while failing to get out of the fifth inning for Cleveland, Chacin's night was remarkably similar.  The Venezuelan went four innings, allowed eight hits and five runs.  A home run by Mike Stanton off reliever Edgmer Escalona in the seventh proved to be the winning margin.  It was the only hit he allowed. 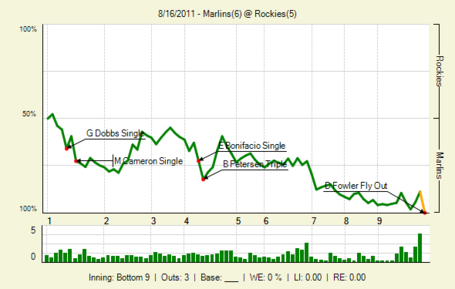